While Peru has made great strides over the past decade in reducing poverty, it needs to stand up firmly for human rights to ensure an economy that is sustainable and benefits all, according to the United Nations human rights chief.

“I welcome Peru’s efforts to fight poverty and exclusion, and its economic progress is undeniable,” said UN High Commissioner for Human Rights Zeid Ra’ad Al Hussein on Tuesday at the end of a two-day visit to the country – where he met with President Pedro Pablo Kuczynski, authorities from Congress and the Judiciary, civil society representatives and the private sector.

“The country must now consolidate such advances by continuing to strengthen the rule of law and the protection of human rights,” he added.

“Development, to be truly sustainable, should not leave anyone behind, and should never be at the expense of the rights of some members of society,” the High Commissioner stressed.

The High Commissioner highlighted the Government’s development of a National Human Rights Action Plan and called for the meaningful participation of all sectors, particularly civil society groups.

“It is our sincere hope that the resulting National Action Plan can adequately address Peru’s human rights needs, particularly those of the most vulnerable groups,” he said, reiterating his office’s readiness to continue providing support and technical expertise.

Mr. Zeid also urged the Government to protect human rights defenders, saying “Peru is no exception to a trend across the Americas – and indeed the world – of harassment, intimidation and alarming attacks on human rights activists.”

The implementation of the 2016 legal framework and National Plan to search for people missing between 1980 and 2000 is also urgent, according to the High Commissioner who voiced concern that “the recommendations made more than a decade ago by the Truth and Reconciliation Commission have to date been insufficiently implemented.”

“The high level of impunity for violations committed during this period is deeply troubling,” the High Commissioner recalled, saying that victims’ needs must be addressed, including their right to truth, justice and reparations and “resources must be made available to ensure that the search for the missing can be fully carried out.”

Turning to the presidential pardon for former President Alberto Fujimori, who was sentenced in 2009 to 25 years in prison, Mr. Zeid stressed: “Fujimori was convicted of crimes amounting to crimes against humanity, that is, crimes of interest to the international community as a whole. The international community must be approached and engaged in this highly important matter.”

Mr. Zeid acknowledged that with women and girls at high risk of gender-based violence, laws designed to prevent and punish those crimes, including domestic violence and femicide, are important, however rigorous implementation and strong preventive measures are also required to ensure punishment for the perpetrator.

“I urge the Government to address the social and cultural attitudes that continue to be used to justify violence against women,” he said.

♦ Receive daily updates directly in your inbox - Subscribe here to a topic.
♦ Download the UN News app for your iOS or Android devices.
peru 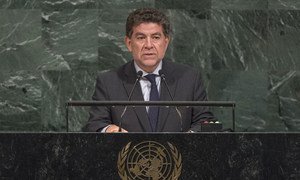 Peru, at UN, calls for more inclusive globalization based on multilateralism and dialogue

Underscoring Peru’s endurance in its combat against terrorism, corruption, as well as its vulnerability to the effects of climate change, the country’s Permanent Representative to the united Nations, Gustavo Meza-Cuadra, said today that the Organization is fundamental for a “peaceful and sustainable” future in Peru, the region and beyond.