Famine can be a war crime and should be prosecuted, says independent UN rights expert

OCHA
Two children carry water in Leer, Unity State in South Sudan, parts of which have been declared as famine-affected.
23 October 2017

Famine can constitute a war crime or crime against humanity, an independent United Nations human rights expert today said, noting that more civilians die from hunger and disease related to conflicts than in direct combat.

“If the famine comes from deliberate action of the State or other players using food as a weapon of war, it is an international crime,” the UN Special Rapporteur on the right to food, Hilal Elver, told journalists in New York.

The expert spoke to the media after presenting her report to the General Assembly committee dealing with social, humanitarian and cultural issues, also known as the Third Committee, where she said an estimated 70 million people in 45 countries need emergency food aid.

Those countries include Nigeria, Somalia, South Sudan, Syria and Yemen, where around 20 million people are hungry or face starvation as a result of man-made conflict.

States and other parties involved in conflicts, Ms. Elver said in a press release, need to recognize their own duty to act, and above all, avoid using hunger as a weapon of war.

The right to food is an unconditional human right and legal entitlement for all people, not a discretionary option, she added.

“It is crucial that the international community understands that it is an international crime to intentionally block access to food, food aid, and to destroy production of food.”

She noted that the most serious cases of man-made famine could be referred to the International Criminal Court (ICC), but said in the press conference that this has never been done.

The independent expert urged governments to focus on peace processes and long-term policies that break the cycle of recurring famines.

UN Special Rapporteurs are in New York this week to present their reports to the General Assembly. Check back to www.un.org/News for highlights throughout the week. 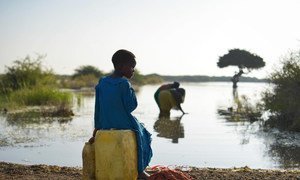 Relief aid is saving lives, but world must tackle root cause of famine: conflict – UN chief