UN/DPI Photo
A lion watches his territory in Kenya.
23 October 2017

Unless the international community integrates wildlife conservation with sustainable development, it will not be able to protect the remaining animal species on Earth, the head of a United Nations-backed environmental treaty today said at the opening of a wildlife conference in the Philippines.

“Development without a regard for the environment is not sustainable. Their future is our future,” said the Executive Secretary of the Convention on Migratory Species (CMS), Brandee Chambers, in a press conference on the opening day of the Twelfth Meeting of countries that have joined CMS. He spoke alongside Ibrahim Thiaw, Deputy Executive Director, UN Environment and UN Environment Goodwill Ambassadors, Nadya Hutagalung and Yann Arthus-Bertrand, among others.

The week-long event is being billed as “the year's largest wildlife conference,” and is for the first time being convened in Asia since the treaty was adopted in Germany in 1979.

More than 1,000 delegates from 120 countries are expected for the five-day conference that will focus on protecting some of the most vulnerable animals in the world, such as the whale shark, which is the world's largest fish with a rapidly declining population due to fishing, illegal poaching, and other human activity.

Among other animals that the hundreds of governments, civil society and private sector representatives, and experts will discuss are ten species of vultures and the Steppe Eagle, which are threatened with extinction, and the giraffe, which is not safeguarded by any convention.

Participants are also expected to strengthen their work with the Convention on International Trade in Endangered Species (CITES), to conserve African carnivores, such as the African lion, the cheetah, the leopard, and the African wild dog.

These proposals are among the 31 to discussed at the conference, affecting at least 35 distinct species.

Addressing the opening of the conference, John Scanlon, the Secretary-General of the Convention on International Trade in Endangered Species of Wild Fauna and Flora, noted the importance of the CITES and the CMS, and other conventions in the family of biodiversity-related conventions that “go to the very heart of international environmental governance” and stressed that “their successful implementation is critical to ensuring the survival of wildlife and to our own quality of life.” 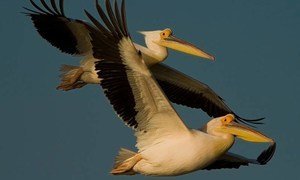