“First, I want to acknowledge the importance of the New Partnership for Africa’s Development (NEPAD),” Mr. Lajčák told an Assembly plenary meeting, referring to the programme first established in 2001 and then integrated into the African Union’s structure to facilitate and coordinate the implementation of continental and regional priority projects.

“NEPAD was something of a trailblazer […] Since its adoption in 2001, NEPAD has led to transformative change,” Mr. Lajčák said, noting that it predates the UN’s 2030 Agenda for Sustainable Development and the African Union’s Agenda 2063 by more than a decade.

For example, he said, NEPAD’s Comprehensive Africa Agriculture Development Programme has improved agricultural productivity on the continent, changing the lives of many African farmers.

Additionally, NEPAD has led to big strides in the integration of African trade. The finalization of the tripartite free trade agreement this summer among the Common Market for Eastern and Southern Africa (COMESA), Southern African Development Community(SADC) and East African Community (EAC) was an important step.

“The continental free trade area is no longer a distant dream. It could very soon be a reality,” he said.

However, faster progress needs to be seen, not only in the two sectors of agriculture and trade, but also in infrastructure, industry, economic diversification and poverty eradication, said Mr. Lajčák.

He went on to stress that no development in Africa can take hold unless it is led from within, noting that there are many exciting developments at the national level, and African countries are also building their capacities for domestic resource mobilization, and tackling illicit financial flows.

Yet, in an increasingly globalized world, the efforts within Africa need to be supported by a revitalized partnership with development partners, including UN bodies and Member States, as well as by investment and financial and technical assistance.

Also the root causes of conflict and suffering must be addressed. “The signing of a trade agreement will mean little to a mother whose young child is very sick from malaria. Similarly, foreign direct investment is not on the mind of someone who is running from a shower of bullets,” he said.

“Africa has a very clear vision” – one which involves all layers of society benefiting from growth and development; one in which malaria or other diseases do not serve as death sentences for hundreds of thousands of people every year; one in which early warning signs of conflict lead more often to successful mediation than to violence; and one in which institutions are strong, women and youth both lead and participate, and good governance is the norm, he said.

“This vision is getting closer to reality,” he concluded.

The plenary featured a debate by UN Member States on NEPAD as well as the decade 2001-2010 to roll back malaria in developing countries, particularly in Africa. 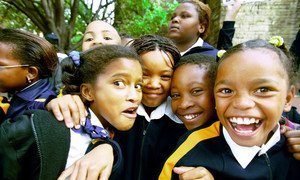 Africa must focus on young people, empower women and girls, and be innovative in leveraging resources and financing for development, Secretary-General António Guterres said Monday as the United Nations kicked off Africa Week.