UNICEF/UN0119119/Brown
Mohammed Yasin, 8, is amongst the Rohingyas refugee children living in shelters at the Kutupalong makeshift camp in Cox's Bazar, Bangladesh.

At present, UNICEF has no access to Rohingya children in northern Rakhine state, where horrific violence since late August has driven over half a million members of the minority Muslim community to seek refuge across the border in Bangladesh.

“This crisis is stealing their childhoods. We must not let it steal their futures at the same time.”

In the report, UNICEF has called for urgent action in four key areas:

The most pressing need for thousands of refugees and refugee children is food, safe water, sanitation and vaccinations. Psychosocial support, education and counselling is also urgently needed.

Meanwhile, the influx of refugees continues unabated – between 1,200 and 1,800 children are arriving per day (about 60 per cent the total number) and thousands more are said to be on way.

To cope with the crisis, UN relief agencies are working at full tilt, but funding and resources are in short supply.

Ahead of an international pledging conference on 23 October in Geneva, UNICEF has urged donors to respond promptly to the requirements of the updated Bangladesh Humanitarian Response Plan released jointly by the UN and humanitarian agencies.

We are appealing for $434 million to help address the urgent needs of over 537,000 #Rohingya refugees in Cox's Bazar. We need your support.

The Plan calls for $434 million, including some $76.1 million to address the immediate needs of newly-arrived Rohingya children, as well as those who arrived before the recent influx, and children from vulnerable host communities.

The ministerial-level conference, organized by the UN Office for Coordination of Humanitarian Affairs (OCHA), International Organization for Migration (IOM) and Office of the UN High Commissioner for Refugees (UNHCR) and co-hosted by the European Union and Kuwait, will provide Governments an opportunity to show their solidarity and share the burden and responsibility.

In the midst of a crisis which appears to overwhelm any response, UN agencies successfully concluded the first phase of a massive oral cholera vaccine (OCV) campaign, reaching over 700,000 children and people over the age of one with protection against the deadly diarrheal disease.

“The coverage is commendable as the oral cholera vaccination campaign was planned and rolled out against very tight timelines,” said Dr. N. Paranietharan, the head of the World Health Organization (WHO) presence in Bangladesh.

Among the 700,487 people inoculated since the campaign was launched on 10 October, 179,848 are children aged between one and five.

“[The campaign] demonstrates the commitment of the Government of Bangladesh, partners on the ground, as well as partners such as GAVI (a public–private global health partnership) and the International Coordinating Group on vaccine provision, to help secure the health and wellbeing of these immensely vulnerable people,” added the WHO official.

The second phase is scheduled for early November to give an additional OCV dose to children aged between one and five years, for added protection.

The vaccination campaign supplements other preventive measures, such as increased access to safe water, adequate sanitation and good hygiene. To help improve hygiene, a bar of soap was also handed out to each individual administered the vaccine. 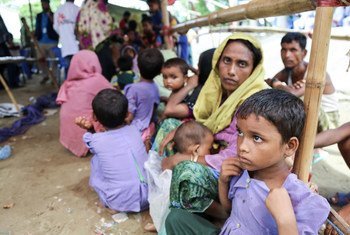 The United Nations migration agency and its partners are supporting Bangladesh in coordinating assistance for the influx of hundreds of thousands of Rohingya refugees, including with clean water and sanitation, shelter, food and psychosocial care for the most vulnerable.