UNIC Yangon
Under-Secretary-General for Political Affairs Jeffrey Feltman in Myanmar during an official visit that ended on 17 October 2017.
17 October 2017

Concluding a visit to Myanmar, the top United Nations political official has underscored the importance of accountability and non-discriminatory rule of law and public safety as part of the comprehensive approach needed to address the fears and distrust among communities in Rakhine.

According to a press note issued by the UN, Under-Secretary-General for Political Affairs Jeffrey Feltman visited several communities affected by the recent violence in northern Rakhine state and viewed dozens of burned and destroyed villages by air.

“He witnessed how, in addition to the documented endemic discrimination against the Rohingya population, socio-economic challenges adversely affect all communities,” read the note.

Mr. Feltman noted the Government's endorsement of the recommendations of the final report of the Advisory Commission on Rakhine State and urged their comprehensive implementation – which the UN can help support if so requested – the note added.

Most of Mr. Feltman's discussions focused on the situation in Rakhine state and the plight of the hundreds of thousands of refugees who have fled to Bangladesh in the aftermath of the 25 August attacks on security positions and subsequent military action.

“He reiterated Secretary-General Antonio Guterres' call that humanitarian actors be given full and unhindered access to northern Rakhine state and that refugees be allowed voluntary, safe and dignified return to their place of origin,” added the press note.

Acknowledging the announcements by the Government of Myanmar, including the State Counsellor's address to the nation on 12 October, regarding the establishment of programmes and policies to address the humanitarian concerns in Rakhine and the return of refugees from Bangladesh, Mr. Feltman encouraged the authorities to utilize the capacities, best practices, and extensive experience of the UN to help assure that stated intentions could be implemented in a timely and effective manner.

In his meeting with the Tatmadaw officials, Mr. Feltman said that in the UN's experience, successful counter-terrorism efforts do not rely exclusively on security measures.

Returning to New York, Mr. Feltman will report to Secretary-General as the Organization continues to respond to the humanitarian and human rights crisis and positions itself to work with Myanmar to help relieve the suffering of the Rohingya population and address the grievances and needs of Rakhine and other ethnic groups.

During his visit, the UN official also attended the commemoration of the signing of Myanmar's National Ceasefire Agreement and met with the signatory ethnic organizations. He also visited internally displaced persons' camps outside Sittwe, the capital of Rakhine state, set up in 2012. 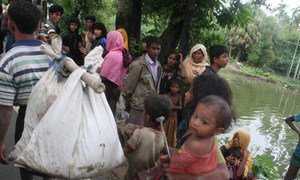 Noting that the humanitarian crisis that has resulted in displacement of hundreds of thousands of Rohingyas from Myanmar not only provides a “breeding ground” for radicalization, but also puts vulnerable people – including young children – at grave risk, United Nations Secretary-General António Guterres called for “swift action” to prevent further instability and find a durable solution.