Amid worsening security and the dire humanitarian and human rights situation in South Sudan, the head of United Nations peacekeeping operations on Tuesday called on the international community to demand that the country's leadership act in a manner that is expected of them.

“I would like to reiterate that the conflict in South Sudan is a man-made conflict for which the leaders of South Sudan bear a direct responsibility,” Jean-Pierre Lacroix, the Under-Secretary-General of the UN Department of Peacekeeping Operations (DPKO), told the Security Council.

“The same leaders responsible for the conflict can also bring the country back from the impending abyss,” he added, underscoring the need for genuine political will to halt military operations, peacefully negotiate and make the compromises necessary to achieve sustainable peace in the country.

During the past month, South Sudan has seen rising insecurity because of numerous clashes in many parts of the country, as well as presence of armed groups and soldiers that continues to drive tension. The insecurity has also led to shrinking space for humanitarian action – which used to be very effective, reaching millions with assistance – as well as restrictions on the movement of relief actors and the UN Mission in the country (UNMISS).

The human rights situation too remains extremely concerning, with alarming reports of extrajudicial killings of civilians, arbitrary arrests and detentions, repression of free speech and harassment of political opponents.

In his briefing, Mr. Lacroix, said that while dialogue remains key, the unwillingness – so far – of significant opposition groups to join, notably because of the concurrent Sudan People's Liberation Army (SPLA) military operations, the credibility of the National Dialogue process remains in question.

Recalling a meeting between Intergovernmental Authority on Development (IGAD, an eight-country trade bloc in Africa) Foreign Ministers with President Salva Kiir and his cabinet, held on 13 October, during which the IGAD group reportedly committed to support the Revitalization Forum, the UN official called on the members of the Security Council to use their “leverage on all parties and encourage them to engage in this process meaningfully and without any preconditions.”

“The conflict in South Sudan is a direct outcome of a prolonged disproportionate access to power and wealth in the country. All future dispensations, therefore, must rest on the principle of inclusivity that leads to equitable power and wealth-sharing,” he said, adding that it is critical that all processes and international support must strive to build institutions so that politics shifts from ownership by individuals to those institutions that must be accountable to the people of South Sudan.

Also in his briefing, Mr. Lacroix updated the Security Council on the deployment of the Regional Protection Force (RPF) to the country. 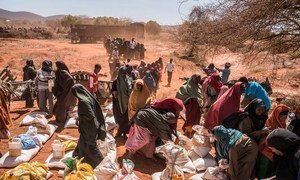 Nearly seven months after the United Nations issued an urgent call for action to counter the threat of famine in South Sudan, Somalia, north-east Nigeria and Yemen, global efforts have kept that crisis at bay but millions of people still suffer and many are dying at this very moment, Secretary-General António Guterres warned today