United Nations human rights experts are urging the Government of France to devise long-term measures to provide access to safe drinking water and sanitation for migrants in Calais and other areas along the northern French coast.

After the so-called ‘Calais Jungle’ camps were dismantled in November 2016, migrants continued to return to the area. Many are living without shelter and proper access to drinking water, toilets or washing facilities.

“It is worrying that approximately 700 migrants in Calais and the greater area of Calais temporarily rely on only 10 portable lavatories and water from 10 taps,” said the UN Special Rapporteur on the human rights to water and sanitation, Léo Heller, in a news release from the Office of the UN High Commissioner for Human Rights (OHCHR).

Despite the decision by the Conseil d’État, the highest administrative court in France, reaffirming the obligation of the French State to provide access to water and sanitation to the migrants in Calais, the local authorities have refused to implement concrete measures.

“Human rights apply to all, including migrants, regardless of their status. Consequently, the legal recognition by the French court of the human rights obligation to provide access to water and sanitation should be commended, but the authority of those decisions is diminished if they are not implemented in practice,” said the Special Rapporteur on the human rights of migrants, Felipe Gonzalez Morales.

Migrants in camps at Grande-Synthe, Tatinghem, Angres and Dieppe rely on help from volunteers and non-governmental organizations (NGOs). They are opening their facilities and provide transportation to sports facilities so that migrants can use toilets and take showers as a temporary solution. 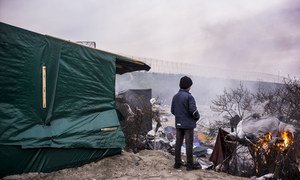