Women and girls are central to the sustainability of rural households and communities, improving rural livelihoods and overall wellbeing, but their role and significance is often overlooked, the head of the United Nations entity for women's empowerment today said.

Women and girls are central to the sustainability of rural households and communities, improving rural livelihoods and overall wellbeing, but their role and significance is often overlooked, the head of the United Nations entity for women's empowerment today said.

“Rural women are highly capable and knowledgeable custodians of their land, and can move further ahead to more fully and effectively participate in green value chains, including by profitably and sustainably linking rural and urban markets,” Ms. Mlambo-Ngcuka said Executive Director of UN Women Phumzile Mlambo-Ngcuka in her statement for the Day.

Globally, women comprise 43 per cent of the agricultural workforce, according to UN figures, with smallholder agriculture farmers producing nearly 80 per cent of food in Asia and sub-Saharan Africa and support the livelihoods of some 2.5 billion people.

According to some estimates, closing the gender gap in access to land and other productive assets could increase agricultural outputs by up to 20 per cent in Africa.

Noting this year's theme for the Day, which focuses on opportunities and challenges in climate-resistant agriculture, the head of UN Women called for more training and skills development for rural women and girls so that they can play a greater role in the development of green food and agricultural value chains.

In addition, she highlighted the role that women farmers can play in protecting biodiversity through the use of indigenous crops and agro-ecological farming methods that are environmentally friendly and free of toxic chemicals.

All this relies on the Governments, however, “providing the social and physical infrastructure that enables rural women's participation in sustainable, climate-resilient agricultural production, processing, transport and marketing.”

But she stressed that life in a rural setting should not automatically lead to agriculture.

“Rural girls have an equal right to their urban peers to a good education, careers in STEM and a thriving role in the digital revolution,” Ms. Mlambo-Ngcuka said referring to the acronym for vocations related to science, technology, engineering and mathematics.

She added that girls should also not automatically end up in unpaid positions caring for family members.

“Only once these inequalities are purposefully levelled, will both women and girls, whether rural or urban, be able to take their place at the heart of the achievement of the Sustainable Development Goals, and the growth of a better future for us all,” the senior UN official said.

International Day of Rural Women is marked one day before World Food Day, which will focus this year on investing in food security and rural development in the context of migration, and on 17 October, the International Day for the Eradication of Poverty. 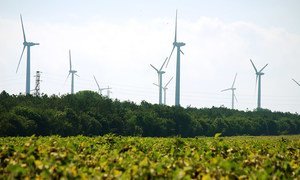 Pointing to scientific evidence warning of increased extreme weather events, United Nations Secretary-General António Guterres, ahead of a trip to the storm-ravaged Caribbean, urged all countries to implement the Paris Agreement on climate change “with greater ambition.”