UNIC Tokyo/Takashi Okano
Jeffrey Brez, Chief of NGO Relations, Advocacy and Special Events of DPI, 3rd from right, and Kaoru Nemoto, Director of UNIC Tokyo, 4th from right, represent the United Nations at a special event held in the margins of the Kyoto International Film and Art Festival.
13 October 2017

Japanese comedians on Friday competed to make people laugh by weaving the Sustainable Development Goals (SDGs) into their performance at a United Nations-supported special event in Kyoto, the country's cultural centre.

“It is fascinating to see so many people take interest in SDGs with today's comedy performance as an entry point, thanks to the influence of entertainment,” said Kaoru Nemoto, Director of UN Information Centre (UNIC) in Tokyo. “Laughter can open up people's minds, and comedy and entertainment can break barriers.”

This creative experiment was made possible by UNIC Tokyo's special collaboration launched earlier this year with Yoshimoto Kogyo, an entertainment giant with some 6,000 comedians under its management.

Jeff Brez, Chief, NGO Relations, Advocacy and Special Events of UN Department of Public Information, said that the UN needs the help of the creative community to spread the word about this master plan to guide the planet to a sustainable future through 2030.

“The challenge of SDGs is that it is complex and that we need time to address. We would like to help bring everybody on board and engage in this important agenda, through simple and down-to-earth messages,” said Yoshimoto Kogyo President and Chief Executive Officer Hiroshi Osaki.

A comedy contest being held at Yoshimoto Gion Kagetsu theatre. The comedians pick up the themes from the SDGs and make up the story to win the prize. UNIC Director Kaoru Nemoto judges the competition along with legendary comedian Kiyoshi Nishikawa and Kenodo Kobayashi. Photo: UNIC Tokyo/Takashi Okano

According to a news release from the event organizer, five groups took to the stage wearing a rainbow of colored t-shirts emblazoned with a SDG's logo. Each group had to choose at least three of the 17 Goals in to their routine.

Last up were Non-Style, a duo who managed to incorporate 11 Goals as they portrayed a baseball player and his girlfriend as the player plans to give her a birthday present. Ms. Nemoto, who served as the judge, decided to award Non-Style the prize of United Nations goods.

The event was part of the 4th Kyoto International Film and Art Festival.

The festival opened on Thursday and runs through Sunday, at the Nishi Hongwanji Temple, a World Heritage site designated by the UN Educational, Scientific and Cultural Organization (UNESCO).

SDGs-themed events during the festival also include a screening of a short promotional movie on SDGs produced by top Japanese creators, and a game for children to collect 17 SDGs stamps featuring the comedians' messages. 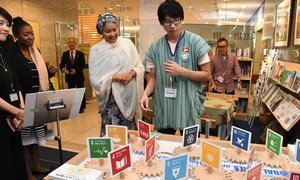 Concluding her three-day visit to Japan today, United Nations Deputy Secretary-General Amina Mohammed today noted how much the Japanese society has embraced the Sustainable Development Goals (SDGs) as a compass guiding to a more prosperous future for themselves.