INTERVIEW: Haiti on path to stability, development thanks to UN mission, says envoy

UN Photo/Logan Abassi
MINUSTAH provides logistical support to Haiti’s Provisionary Electoral Council to transport ballots from around the country to the capital, Port-au-Prince, for tabulation during the 2015 presidential and legislative elections.
13 October 2017
Peace and Security

After 13 years, the United Nations Stabilization Mission in Haiti (MINUSTAH) will close its doors on 15 October. The Mission was established by the Security Council at a time when State authority had been weak and limited to parts of the capital, Port-au-Prince, with the three branches of power either non-functional or non-existent, and a national police force that was overwhelmed by the multiple threats to public order and the rule of law.

Today, the Haitian people enjoy a considerable degree of security and greater stability; political violence has diminished; armed gangs no longer hold the population hostage, thanks in part to the work of the 14,000-strong national police; and all three branches of power are in place.

“Haiti is now in a position to move forward and consolidate the stability that has been obtained, as a framework for continued social and economic development,” says Sandra Honoré, the Secretary-General’s Special Representative for Haiti and head of MINUSTAH.

Next week will see the beginning of a smaller successor mission – the UN Mission for Justice Support in Haiti (MINUJUSTH) – which is mandated by the Security Council to assist the Government in strengthening rule of law institutions, reinforcing national police capacities, and engaging in human rights monitoring, reporting and analysis.

On the eve of MINUSTAH’s closure, Ms. Honoré spoke with UN News about the Mission’s contributions to the Haitian Government and people, what continued UN support to the fight against cholera will look like, and how the UN is perceived in the small Caribbean nation.

UN News: What does the departure of the UN Mission represent for Haiti?

Sandra Honoré: The departure of MINUSTAH represents, on the one hand, that the stabilization mandate entrusted to the Mission by the Security Council has been met, and that Haiti is now in a position to move forward and consolidate the stability that has been obtained, as a framework for continued social and economic development.

Haiti is now in a position to move forward and consolidate the stability that has been obtained.

The Security Council in taking the decision to close MINUSTAH – which has been operating and cooperating with the Haitian authorities and the Haitian people for 13 years, also in recognition of certain weaknesses that still exist in the justice and rule of law areas – has decided to establish the United Nations Mission for Justice Support in Haiti. It is my hope that the opportunity will be seized by the Government and people of Haiti to use the contribution of the new UN Mission to advance and to consolidate rule of law in Haiti.

UN News: What do you think was MINUSTAH’s strongest contribution to the Haitian people?

Sandra Honoré: MINUSTAH’s strongest contribution was to support the Haitian people with the provision of a secure and stable environment; to support them with the professionalization of the Haitian National Police, which numbered some 3,300 when MINUSTAH was established. They now are at 14,000 and by the end of 2017 will reach a minimum level of 15,000. The percentage of women in the police force has also increased: there are now 9 per cent female police officers in a country where the female members of the population number 52 per cent. It is important that the Haitian National Police also reflect the population as a whole. 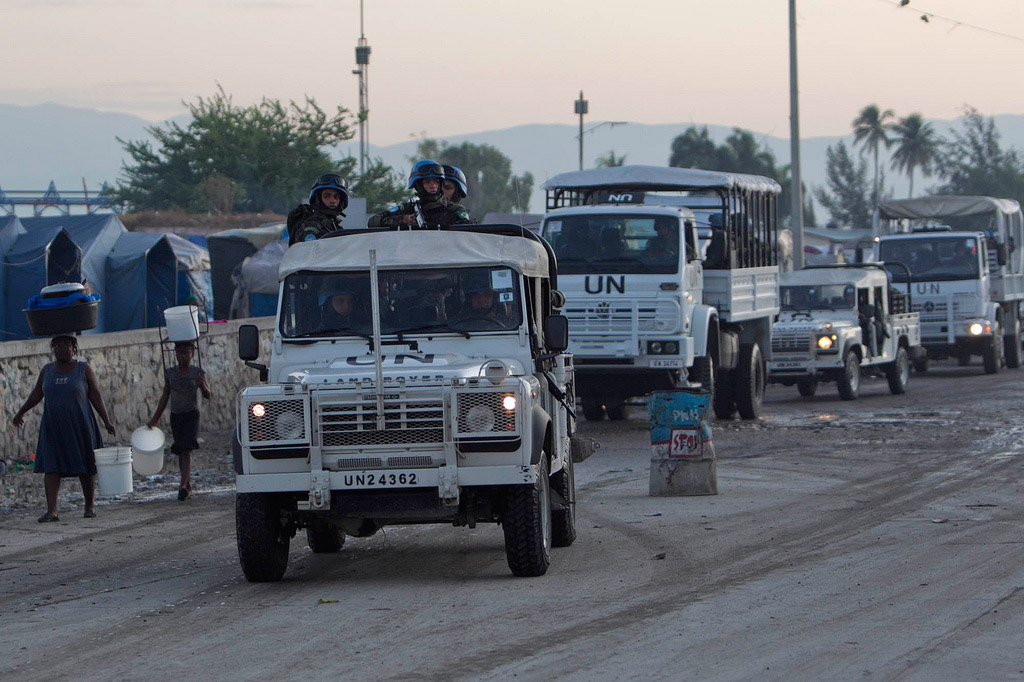 Brazilian peacekeepers with MINUSTAH arrive in Cité Soleil for a joint security operation with the Haitian National Police to crack down on criminal activity in key areas of the capital, Port-au-Prince, in July 2011. UN Photo/Victoria Hazou

The Mission was also able to support the electoral processes in the country. During 13 years, we saw the handover – on three occasions – from one democratically-elected President to another, including from one elected President to another from the opposition in 2011. The most recent handover being to President Jovenel Moïse, who assumed office in February this year. The fact that the democratic process has started to become stronger, to consolidate itself. The fact that the three powers of the State are now functioning: the executive; the elected parliament; and the judiciary.

I think these are the legacy of MINUSTAH and the elements of the support that the Mission was able to provide to the Haitian Government, and above all to the Haitian people, as they strive for a better standard of living.

UN News: The UN launched a strategy to help Haiti tackle cholera. What will the UN support look like once MINUSTAH leaves, and what is the current state of relations between the UN and Haitians?

Sandra Honoré: The support strategy of the United Nations for the Government of Haiti, as the Government moves to work toward eliminating the transmission of cholera, will continue even after MINUSTAH leaves. This support was not only provided through MINUSTAH but also, importantly, through the UN agencies, funds and programmes, such as UNICEF and the Pan-American Health Organization (PAHO) – the regional arm of the World Health Organization (WHO). 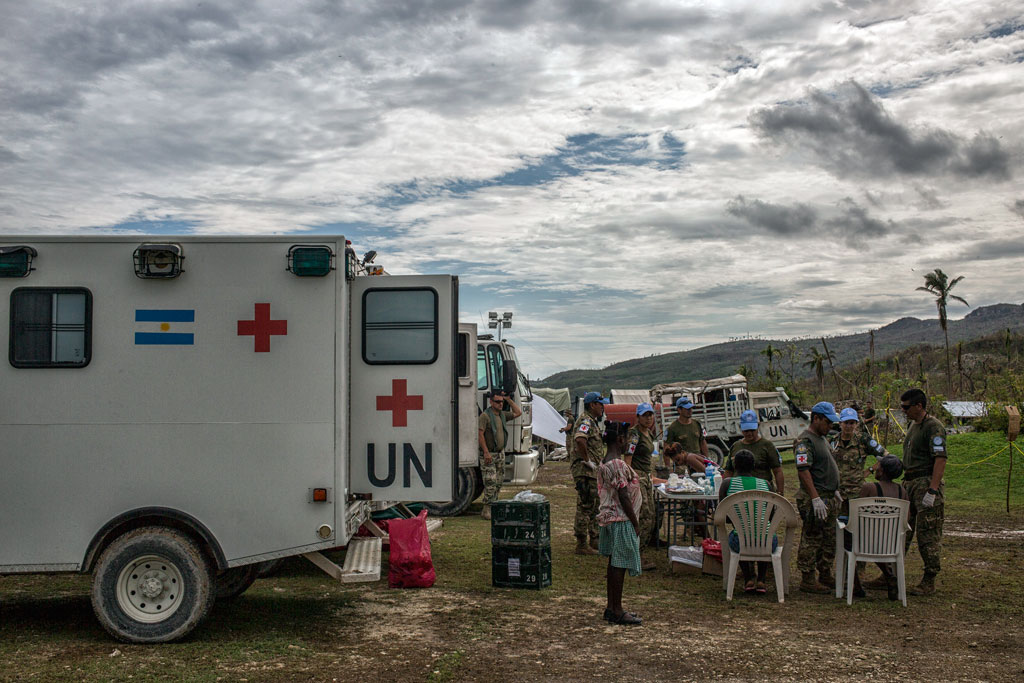 The Secretary-General announced in December of 2016 the new approach of the Organization to support the Government of Haiti. This involves the two tracks: one dealing with the treatment of cholera, and infrastructure for water and sanitation – which is sadly lacking in the country; and the second track of material assistance for communities most affected.

MINUSTAH’s strongest contribution was to support the Haitian people with the provision of a secure and stable environment.

The Secretary-General has also asked Member States to forego the return to them of unexpended balances, for example from the MINUSTAH 2015-2016 budget, to be used on the new approach.

It is my hope that Member States will respond positively to the call from the Secretary-General, and that the work of the Special Envoy will go beyond the support for cholera and also involve the 2030 Agenda for Sustainable Development and the goals that Haiti has for its development within the framework of the 2030 Agenda.

UN News: How is the UN perceived currently and what are relations like between the UN and the Haitian people?

Sandra Honoré: The relations between the UN and the Haitian people are positive. In the time that I have been there I have been able to interact with Haitians from all sections of the society at all levels – even those who may have some difficulty, philosophically let’s say, with the fact that a peacekeeping mission is functioning in the country. But they all acknowledge the contribution that MINUSTAH has been able to make to a safe and secure environment and to stabilization in the country, which saw a period of sustained disturbances in 2004 which led to the establishment MINUSTAH.

So, I see a relationship that is positive and I see a desire on the part of the Haitian people to see the United Nations contributing more to development and the development objectives of the country. 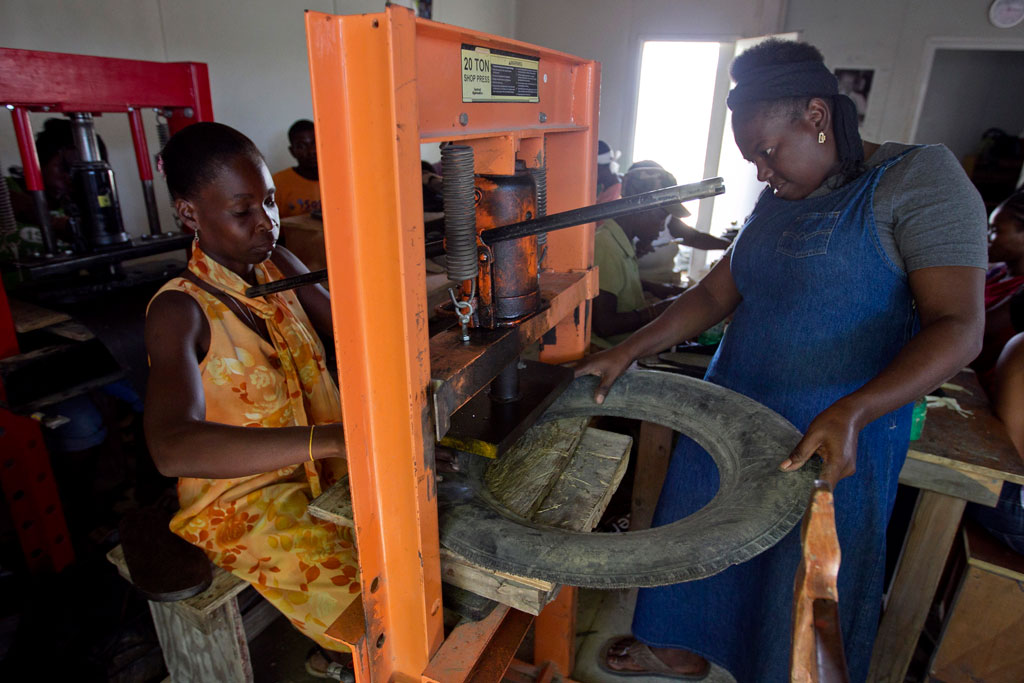 At REBUILD Globally in the capital, Port-au-Prince, workers fabricate sandals made of recycled tires, an employment and vocational training programme partially funded by a Quick Impact Project grant from MINUSTAH. UN Photo/Victoria Hazou

UN News: As head of the Mission, does any particular memory stand out?

Sandra Honoré: I spent a lot of time after I arrived in Haiti in July 2013 working with my colleagues in MINUSTAH and in the UN system in the country, including UNDP, UNOPS and UN Women, on the electoral question together with the provisional electoral council.

There were some moments that were very difficult. The electoral process, as you know, started in August 2015 and was not concluded until January 2017. There was a presidential election in October 2015 which was rerun so that the verification process could be conducted. At the end of it, President Moïse was declared the winner in the first round of the rerun presidential election, and following that the appointment of the President on 7 February and the installation of his Government on 22 March – I think that was a particularly gratifying moment because it was a moment that demonstrated that the attention and ‘stick-to-it-iveness’, as it were, that had to be applied to ensure that the electoral process was completed, that that was in fact done and that Haiti was now on the path to be able to concentrate on her development, and that was certainly a moment of gratification.

♦ Receive daily updates directly in your inbox - Subscribe here to a topic.
♦ Download the UN News app for your iOS or Android devices.
MINUSTAH

Haiti has seen a significant turnaround from profound instability, widespread political violence, and a climate of lawlessness that in 2004 impacted the every-day lives of millions of Haitians, the head of the United Nations peacekeeping mission in the Caribbean islands country told the Security Council on Thursday.