United Nations Member States began Thursday in Geneva the sixth thematic session of discussions on the proposed Global Compact on Migration, during which delegates and experts will examine the issue of labour mobility of migrants.

The talks, focused on the proposed Global Compact for Safe, Orderly and Regular Migration will explore, among others, comprehensive migration policies to address irregular migration and propose more regular pathways including family reunification, regularization, and transition from informal to the formal economy.

“The Global Compact on Migration is in fact the opportunity and the opportunity for States to face the challenges of migration,” said UN Special Representative for Migration, Louise Arbor, at the opening of the meeting.

Recalling the importance of migration as an engine of economic growth, UN General Assembly President Miroslav Lajčák advocated for a global compact, “not just an agreement on paper, but concluded on the basis of a political program.”

According Mr. Lajčák, “whatever the nature of our passports, the citizens of the world have the same rights.”

Three panels are also exchanging ideas on how to reduce the costs of labour migration, promote fair and ethical recruitment and explore labour migration schemes between countries of origin and destination.

“While most migrations are well managed and undertaken through completely legal channels, not all people who wish to migrate find the right channel to do so,” Ms. Arbor pointed out.

A series of side events will complement these discussions by focusing on topics such as health, ethical recruitment and skills recognition.

At the same time, several intergovernmental meetings are also taking place in Geneva, including the Seventh Global Meeting of Chairs and Secretariats of Consultative Processes on Migration, which focused on the regional inputs to the Global Compact.

The International Organization for Migration (IOM) has provided support to the GCM consultations, particularly by extending the required technical and policy expertise, including the publication of suggested actions to States for expanding labour mobility channels.

The final thematic session will lead to the next GCM meeting to be held in Puerto Vallarta, Mexico in December, where governments will take stock of the discussions that began on 8 May and encompass discussions on the human rights of all migrants, social inclusion, cohesion and all forms of discrimination. 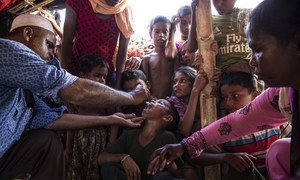 In a race to prevent a cholera outbreak among the more than half a million Rohingya refugee arrivals over the past six weeks in Cox’s Bazaar, Bangladesh, United Nations agencies launched on Tuesday a massive immunization campaign.