Daniil Nenashev/World Bank
A herd of cattle graze in a pasture near a village in Kazakhstan.
12 October 2017

“We have made progress towards ending tuberculosis, yet to a large extent people with zoonotic TB are left behind,” said Mario Raviglione, Director of the World Health Organization’s (WHO) Global TB Programme, in a news statement.

Today, at the 48th Union World Conference on Lung Health in Guadalajara, Mexico, WHO, the Food and Agriculture Organization (FAO), World Organisation for Animal Health (OIE), and International Union Against Tuberculosis and Lung Disease, who have joined forces to develop the Roadmap for Zoonotic TB, launched the initiative – addressing the major health and economic impacts of this disease.

“The priorities outlined in this roadmap highlight the need for multi-sectoral action to tackle this neglected form of TB and achieve the targets of the UN Sustainable Development Goals (SDGs) and WHO’s End TB Strategy,” said Mr Raviglione.

New data released by WHO estimates that over 140,000 people fall ill and more than 12,000 people lose their lives each year to zoonotic TB, which is most often communicated to humans through food consumption, usually non-heat-treated dairy products or raw or improperly cooked meat from diseased animals. Direct transmission from infected animals or animal products to people can also occur.

“We must recognize the interdependence of the health of people and animals in the fight against TB. Specifically, bovine TB, caused by Mycobacterium bovis, affects cattle, threatens people’s livelihoods and results in major economic and trade barriers, as well as posing a major risk to food safety and human health,” said Berhe Tekola, Director of the FAO Animal Production and Health Division.

The advanced laboratory tools required to diagnose zoonotic TB are frequently unavailable and the disease is resistant to pyrazinamide – one of the standard first-line medications used to treat TB. Therefore, patients are often misdiagnosed and may receive ineffective treatment.

The roadmap articulates 10 priority actions that human and animal health actors should take, and defines milestones for the short- and medium-term, which include improving the evidence base; reducing transmission between animals and humans; and strengthening intersectoral collaboration.

AUDIO: WHO's Dr Anna Dean explains about the first Roadmap for Zoonotic TB.

Economically, the disease can devastate cattle production with losses related to animal production, markets and trade, as well as costs incurred to implement surveillance and control programmes. To eliminate it, domestic livestock found to be infected with bovine TB must be slaughtered under veterinary supervision.

Wealthier countries are affected as well.

In the US between 2000 and 2008, more than $200 million in emergency funding was required to respond to bovine TB outbreaks. Wildlife can also be infected, serving as a reservoir of infection for livestock and people, potentially threatening conservation efforts. 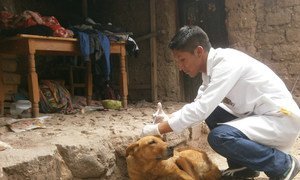 The largest global anti-rabies initiative to end human deaths from dog-transmitted rabies by 2030 was announced, today, World Rabies Day, making it a priority disease for key international organizations and governments, according to the United Nations health agency.