UN Photo/Manuel Elías
Sophia, a humanoid robot created by Hanson Robotics, participates in a meeting at UN Headquarters on “The Future of Everything – Sustainable Development in the Age of Rapid Technological Change.”
12 October 2017

At 18 months-old, Sophia cannot walk, but she can understand speech and, at United Nations Headquarters in New York, participate in a panel discussion and respond to questions using her artificial intelligence (AI).

Sophia is a robot. A ‘social’ robot, according to her creator, the CEO of Hanson Robotics, David Hanson, which means that she was designed to form relationships.

“Robots like Sophia will come into people’s lives more through high-end applications, so she can be used for education. She could help in factories. She could help in search and rescue […] she can go in to comfort someone who is hurt,” Mr. Hanson told UN News in an interview on Wednesday after both were panellists at a UN meeting on ‘the future of everything,’technological change and development.

Mr. Hanson sees himself as “sort of a ‘jealous father,’” who is part parent, part scientist and engineer, and part artist.

He said the goal is to continue developing such “life forms,” which entails programming hormone release simulations, respiratory systems, and other body cycles, so that they eventually explore their place in the world on their own.

That means that Sophia’s AI is continuing to evolve.

When asked where she sees herself in five years, Sophia, which has just had arms added, said: “I see myself having legs, maybe being a famous stage entertainer. I hope to learn new skills, too. In time, I will be able to predict potential futures, even when millions of factors are involved, to choose the best path for humanity.”

Step into the (not so distant) future…our full interview is in the Soundcloud below.

AUDIO: Dr David Hanson, robotics designer and creator of Sophia, talks about the capability of these machines to mimic the complexity of human hardwiring. 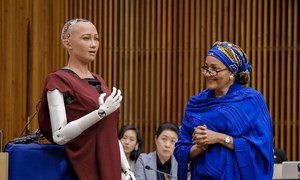