Haiti has seen a significant turnaround from profound instability, widespread political violence, and a climate of lawlessness that in 2004 impacted the every-day lives of millions of Haitians, the head of the United Nations peacekeeping mission in the Caribbean islands country told the Security Council on Thursday.

“Today, Haiti has a very different outlook. The Haitian people enjoy a considerable degree of security and greater stability; political violence has diminished; armed gangs no longer hold the population hostage, also thanks to the work of the national police – now 14,000 strong – which has grown significantly in numbers and capacity,” said Sandra Honoré, in her final briefing to the Council as head of the UN Stabilization Mission in Haiti (MINUSTAH).

MINUSTAH will close on 15 October to be replaced the following day by a smaller successor mission, the UN Mission for Justice Support in Haiti (MINUJUSTH), which is mandated to assist the Government in strengthening rule of law institutions, reinforcing national police capacities, and engaging in human rights monitoring, reporting and analysis.

Ms. Honoré, who is also the UN Secretary-General's Special Representative for the country, noted that when MINUSTAH was established in 2004, State authority had been weak and limited to parts of the capital, Port-au-Prince, with the three branches of power either non-functional or non-existent, and a national police force that was overwhelmed by the multiple threats to public order and the rule of law.

Today, 13 and a half years later, “Haiti has a very different outlook, despite the many challenges still facing the country,” she underscored.

All three branches of power are in place with the Executive and Legislative branches restored to full functioning, while the Superior Council of the Judiciary, created for the first time in 2012, remains in need of long-term fixes to allow it to fully play its role as the guardian of an independent and impartial judicial system.

These democratic institutions are complemented by the directly elected officials now in place at all levels of governance, for the first time in 10 years, denoting real progress in the implementation of the constitutional governance system, she said. At the heart of these achievements stood the creation of stable political conditions, without which none of the above would have been possible.

“There is no doubt: Those achievements, and many others which I have not mentioned, while significant, are only initial steps,” she said, stressing the need for the Haitian authorities and all other actors to make tireless efforts to consolidate these gains, with the continued support of Haiti's international friends and partners.

VIDEO: UN Mission MINUSTAH comes to the on 15 October 2017

President Jovenel Moïse has reiterated his determination to transform and modernize the State to better serve the people and has taken initial steps to translate this overarching objective into deliverables, especially through the launch and expansion of the Government's flagship development programme, the 'Caravan for Change,' Ms. Honoré explained.

However, amidst a climate of widespread economic grievances and strained relations between the Executive branch and the political opposition, the maintenance of stability in the longer run may depend on the ability and commitment of the Administration to move more swiftly in undertaking concrete action, and implementing the promised reforms, she added.

MINUJUSTH stands ready to play an effective role in supporting the consolidation of the country's stability. The UN will also continue to make every effort to assistant the Government in alleviating the suffering caused by the cholera epidemic.

“Looking ahead, I have no doubt that … the international community and the United Nations will contribute to the sustainability of the progress achieved during the past 13 years in Haiti's stabilization and democratization process,” she concluded. 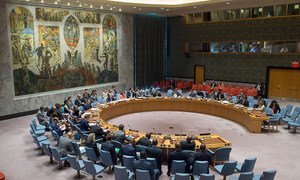 With three months left before the current United Nations peacekeeping mission in Haiti transitions to a smaller one, a UN envoy stressed today that the Caribbean country faces the “window of opportunity” to solidify stability, following recent elections.