The total number of persons that suffer from hunger in Latin America and the Caribbean has increased, reversing decades of progress, even as overweight and obesity emerged as a major problem in all countries in the region of the Americas, a United Nations-backed report shows.

“The region has taken a significant step backwards in a fight that it was winning,” Julio Berdegué, Regional Representative of the Food and Agriculture Organization (FAO), said Thursday. “We cannot tolerate the current levels of hunger and obesity, as they will paralyze an entire generation.”

Hunger rates have declined in 21 of the 27 countries of the region in recent years, but the absolute number of people suffering from hunger increased, according to the report published by FAO and the Pan American Health Organization (PAHO).

In 2016, some 42.5 million people in the region did not have enough food for their daily caloric needs, a six per cent increase, or 2.4 million additional undernourished people.

“It will be very difficult for the region to reach Sustainable Development Goal 2 on eradicating hunger and malnutrition by 2030” if this trend does not change, said Mr. Berdegué.

Overweight and obesity continue to affect all age groups

Overweight and obesity is a public health problem in all countries of the Americas, affecting all age groups.

Some 7.5 per cent of those under the age of five in South America, or 2.5 million children, suffer from overweight and obesity, as do six per cent of the children in Central America and 6.9 per cent of those in the Caribbean. The rate increases with age, affecting a third of the adolescents and two thirds of the adults in the region, with women being the most affected.

The problem is growing in scale to catch up with the region’s 11 per cent rate of child stunting due to chronic malnutrition. 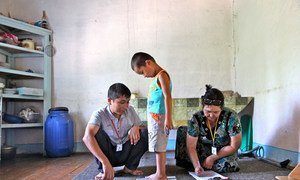