UN Photo/Cia Pak
Maman Sambo Sidikou, Special Representative of the Secretary-General for the UN Stabilization Mission in the Democratic Republic of the Congo (MONUSCO), addresses the Security Council.
11 October 2017

The notion that elections would most probably not be held before the end of 2017 has regrettably led to the re-emergence of a climate of political uncertainty and tensions in the Democratic Republic of the Congo (DRC), a United Nations envoy for that country told the Security Council today.

“As this Council is aware, challenges related to the implementation of the 31 December Agreement have unfortunately persisted in recent months,” said Maman Sidikou, UN Secretary-General’s Special Representative for DRC, in a briefing to the 15-member body.

He explained that the broad consensus achieved among key political actors with the signing of the 31 December 2016 Agreement has not been maintained consistently throughout the year, specifically as this relates to a transitional oversight mechanism, implementation of confidence-building measures, and the electoral timelines.

The Agreement envisioned the holding of elections by the end of 2017.

He reported that as of mid-September, the Independent National Electoral Commission (CENI) had registered over 41 million voters, with women representing 48 per cent of them.

In early September, voter registration commenced in the Kasai and Kasai Central provinces, the last remaining provinces to undergo this process. However, uncertainty persists regarding the registration of members of the Diaspora, the mode of voting and the timeline for the adoption of critical legislative enactments.

And regrettably, the financial resources required to ensure sustained progress towards the holding of elections are not yet forthcoming. The CENI remains under-funded, and the multi-partner basket support fund managed by the UN Development Programme remains funded at only six per cent of the estimated $123 million required.

The creation of conditions conducive to the holding of elections rests largely on the implementation of confidence-building measures, the opening of political space, and the full respect of human rights, including the freedoms of opinion, expression and peaceful assembly.

The UN is concerned that journalists, political opponents and civil society activists remain subject to intimidation, harassment and violence, mostly in connection with their activities and expression of their opinions in relation to the political process.

He went on to highlight the deteriorating security situation in several regions of the country, including targeted attacks against the national security forces by the Mai-Mai group in North Kivu.

“The impact of the deterioration of the security situation on the lives of civilian populations is clearly visible,” Mr. Sidikou said, noting that between June and August this year, the UN Organization Stabilization Mission in the Democratic Republic of the Congo (MONUSCO) reported 1,329 cases of violations and abuses of human rights.

Armed groups carried out 533 attacks, while state actors were responsible for 769 violations, of which 27 percent were attributed to the armed forces and 24 percent to the national police.

Turning to the deteriorating humanitarian situation, he said that about 8.5 million people – including 5.5 million children – are currently in need of humanitarian assistance while the number of internally displaced persons reached 3.8 million, and more than 621,000 Congolese sought refuge in the subregion.

In the face of budget cuts, MONUSCO has continuously adjusted its machinery and presence to better adapt its footprint to priorities set out by the Council, Mr. Sidikou noted. The mission will soon complete the repatriation of 1,687 military personnel, and is also in the process of introducing a new strategy, particularly in areas affected by the closure of MONUSCO bases, that provides the mission with a flexibility in fulfilling its mandate to protect civilians. 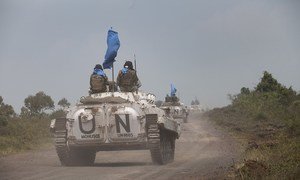 The United Nations Security Council has called on the Government of the Democratic Republic of the Congo to investigate into, and bring to justice those behind Monday’s attack on a peacekeeping mission base in North Kivu that resulted in the deaths of two “blue helmets.”