UNICEF/Giacomo Pirozzi
Health workers measure and record the height and weight of Erlan Bernoupereinev, 3, at his home, in Kindik Uzyak Village in the Konlikul District, Republic of Karakalpakstan in Uzbekistan.
11 October 2017

“These data highlight, remind and reinforce that overweight and obesity is a global health crisis today, and threatens to worsen in coming years unless we start taking drastic action,” Fiona Bull, programme coordinator for surveillance and population-based prevention of noncommunicable diseases (NCDs) at the World Health Organization (WHO), said Wednesday in a news release.

The study led by Imperial College London and WHO was published in The Lancet, ahead of World Obesity Day on Wednesday. It looked at body mass index (BMI) from weight and height measurements of nearly 130 million people, including 31.5 million youth aged five to 19.

Combined, the number of obese five to 19 year olds rose more than tenfold globally, from 11 million in 1975 to 124 million in 2016. An additional 213 million were overweight in 2016 but fell below the threshold for obesity.

“These worrying trends reflect the impact of food marketing and policies across the globe, with healthy nutritious foods too expensive for poor families and communities,” said lead author Majid Ezzati, a professor at Imperial's School of Public Health.

He said that the trend predicts a generation of children and adolescents growing up obese and at greater risk of diseases, like diabetes, stressing the need to make healthy, nutritious food more available at home and school, especially in poor families and communities, as well as the need for regulations and taxes to protect children from unhealthy foods.

More youth will be obese than underweight by 2022

In conjunction with the study, WHO is publishing a summary of the plan that gives countries clear guidance on effective actions to curb childhood and adolescent obesity. WHO has also released guidelines calling on frontline healthcare workers to actively identify and manage children who are overweight or obese.

♦ Receive daily updates directly in your inbox - Subscribe here to a topic.
♦ Download the UN News app for your iOS or Android devices.
child|health 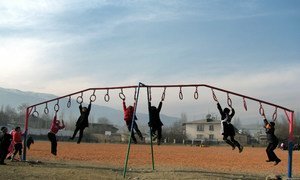