A nutrition crisis, exacerbated by continuing violence, instability and displacement, is threatening the lives and futures of thousands of children in Mali, the United Nations Children's Fund (UNICEF) warned today.

A report published today shows that an estimated 165,000 children are expected to suffer from severe acute malnutrition across the country in 2018.

“Behind these figures are the lives of the most vulnerable and forgotten girls and boys in Mali,” said UNICEF Representative Lucia Elmi in a press release.

“We must provide life-saving treatment and ensure each and every one of these children can fully recover. At the same time, we need to invest in the critical first 1,000 days of the lives of children to reduce the risk of acute malnutrition from occurring in the first place.”

The rate of acute malnutrition among children under five has reached critical levels in the conflict-affected areas of Timbuktu and Gao, while the national rate also remains very high.

The report finds acute malnutrition of children in Timbuktu has risen to 15.7 per cent and in Gao to 15.2 per cent, a worrying rise from “serious” to “critical” level on the World Health Organisation's classification scale. Serious levels of acute malnutrition were also recorded in the regions of Kayes, at 14.2 per cent, and in Taoudéni, at 14.3 per cent, while the national rate is 10.7 per cent.

Children who suffer from the severe form of acute malnutrition have grave muscle wasting, very low weight for their height, and are nine times more likely to die in case of disease due to a weakened immune system.

Since the 2012 political and security crisis in Mali, violence and instability have led to displacements of population and disruption of social services in the north of the country, with detrimental impact on the nutritional status of the most vulnerable girls and boys. Other factors, such as limited access to water and sanitation in northern areas and childhood diseases like diarrhea, acute respiratory infections and malaria, have aggravated the situation.

Investing in the first 1,000 days of a child, through promotion of practices, such as exclusive breastfeeding for the first six months and handwashing with clean water and soap, can effectively prevent malnutrition. 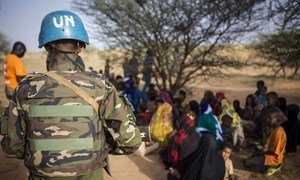 The Security Council today expressed a deep concern over the persistent delays in fully implementing key provisions of the peace agreement between the Government of Mali and the Plateforme and Coordination armed groups, urging the parties to adopt an agreed-upon timeline for implementation.