FAO/Luc Genot
Southern Madagascar has been hit by consecutive droughts.

6 October 2017
The United Nations health agency is rapidly scaling up its response to a plague outbreak in Madagascar that has spread to the capital and port towns, infecting more than 100 people in just a few weeks.

“WHO is concerned that plague could spread further because it is already present in several cities and this is the start of the epidemic season, which usually runs from September to April,” said Charlotte Ndiaye, the World Health Organization (WHO) Representative in Madagascar in a news update.

Plague is a disease of poverty. It thrives in places with poor sanitary conditions and inadequate health services. It can kill quickly if left untreated, but can also be cured by common antibiotics if delivered early, according to WHO.

The Government of Madagascar has confirmed that the death of a Seychellois basketball coach visiting the nation for a sports event was due to pneumonic plague. He died in the hospital in Antananarivo on 27 September.

Health authorities are tracing people with whom he came in contact, thus exposing them, to administer antibiotics as a precautionary measure to prevent infection.

The incident brings the total number of dead to 21 since the outbreak was identified in late August while at least 114 others have been infected.

“Our teams are on the ground in Madagascar providing technical guidance, conducting assessments, supporting disease surveillance and engaging with communities,” Dr. Ndiaye explained.

Further deployments of WHO staff and response partners in the Global Outbreak Alert and Response Network are underway, as well as increased supplies of antibiotics, personal protective equipment and other supplies.

“We are doing everything we can to support the Government’s efforts, including by coordinating health actors,” she added.

The Malagasy Red Cross is also scaling-up community surveillance, contact tracing and communication in to stem the spread as it points out that the bubonic plague bacterium can travel to a person’s lungs, causing pneumonic plague, which can spread quickly from person to person through droplets in the air.

WHO has released $300,000 in emergency funds, as well as critical medical supplies, to quickly scale up operational efforts, and is appealing for $1.5 million to support the response.

Plague is endemic to Madagascar, where around 400 cases of – mostly bubonic – plague are reported annually. Contrary to past outbreaks, this one is affecting large urban areas, which increases the risk of transmission. The number of cases identified to date is higher than expected for this time of year.

Bubonic plague is spread by infected rats via flea bite while pneumonic is transmitted person-to-person. The current outbreak includes both forms of plague. Nearly half of the cases identified so far are of pneumonic plague. 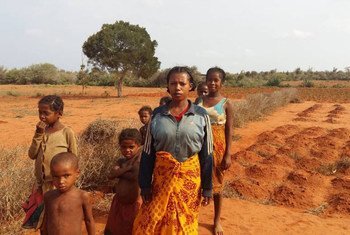 18 November 2016
United Nations agencies are calling for immediate financial support for farmers and families in Madagascar in order to address the growing food crisis that could worsen if crops are not planted by December and January.