Voicing concern over tensions in Cameroon, the United Nations human rights wing has urged the Government and dissatisfied groups to engage in a meaningful political dialogue to fully address long standing grievances.

Speaking to the press today in Geneva, Rupert Colville, the Spokesperson for the Office of the UN High Commissioner for Human Rights (OHCHR) also called on the authorities in the African nation to conduct impartial and effective investigations into Sunday's violence in which at least 10 people were killed.

“Credible sources indicate that some of these deaths resulted from excessive use of force by the security forces,” said the Spokesperson at the regular news briefing.

Cameroon's Anglophone regions have seen multiple strikes and demonstrations over the past year as resentment and tensions have built at what, he said, English-speakers see as discrimination against them in favour of the majority French-speaking population.

Noting that over the past few months, public and private property has been damaged, including arson attacks on a number of schools, Mr. Colville called on all people to pursue peaceful means to make themselves heard.

In the same vein, he also urged the authorities to ensure that the security forces exercise restraint and take measures to prevent the use of force when policing demonstrations.

“People should be allowed to exercise their right to peaceful assembly and freedom of expression, including through having uninterrupted access to the internet,” he stated.

Further at the briefing, he noted that OHCHR welcomed the comments by President Paul Biya, on Sunday, in which the President condemned all forms of violence, irrespective of the perpetrators, and called for dialogue as the only way to find a durable solution. 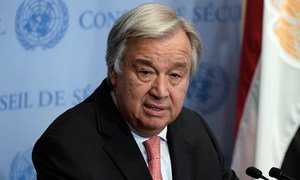 Strongly condemning recent violence in south-west and north-west regions of Cameroon, including reported loss of life, United Nations Secretary-General António Guterres has urged all stakeholders to refrain from any further acts of violence and called on the authorities to investigate the incidents.