MINUSMA/Harandane Dicko
A battalion of peacekeepers from MINUSMA patrol the streets of Gao, northern Mali at night.
5 October 2017

While recent crises threatening the peace process in Mali had been overcome and new agreements reached, progress must be accelerated as the situation remains perilous for peacekeepers and civilians, the head of United Nations peacekeeping efforts in the West African country told the Security Council today.

“Despite the positive developments, we must remember that the agreed deadlines of 2018 are quickly approaching and the challenges are enormous,” said Mahamat Saleh Annnadif, Special Representative of the Secretary-General in Mali and Head of the UN Multidimensional Integrated Stabilization Mission in Mali (MINUSMA) said via videoconference from the Malian capital, Bamako.

“All parties must redouble their efforts to re-establish trust between them and, despite the prolonged delays in the implementation of the Agreement [on Peace and Reconciliation in Mali], engage in necessary reforms and provide a peace dividend to the people,” he added.

He said that the period under the Council’s review, mid-June to mid-September, witnessed debate over a draft revision of the national Constitution amid armed clashes between the Platform and Coordination, the two coalitions that had signed onto the 2015 peace agreement. The combined efforts of the signatory movements and the international community had allowed MINUSMA to overcome the crises, but delays in implementing the agreement persisted.

Following the clashes, he said, truces were agreed upon in August, with further commitments to end hostilities having been signed in September. Earlier in the day, several prisoners held by the groups had been freed and recent progress included the participation in a 20 September high-level meeting in New York of both coalition leaders, who had agreed to accelerate the peace agreement’s implementation.

Some of the specifics they had discussed included establishing a second chamber of Parliament, operationalizing territorial collectives, launching demobilization activities, security sector reform and redeploying the reformed national military.

“Yet, the challenges remain enormous,” he stressed. The Human rights situation remains a source of deep concern, particularly given the rise of armed extremism, the absence of State authority in certain areas and the imposition of anti-terrorism measures. While progress in fighting impunity for abuses that occurred during the 2012 crisis included the conviction of Aliou Mahamane Touré, there must be justice for all and every perpetrator must held accountable, he said.

He added that the recently authorized sanctions regime was an important part of the pursuit of justice and peace. Initiatives such as the dissemination of information on human rights and the establishment of the international commission of inquiry would also help fight impunity, he said, adding that MINUSMA continued to support State institutions in all areas through regular dialogue.

The security situation remained a major obstacle, he said, with nearly daily losses of UN peacekeepers due to anti-personnel mines and improvised explosives. Accelerated reconciliation efforts were needed as was the full deployment of the escort battalion for the regional reaction force. Given all the challenges, he reiterated the need for funding to invest in protection, improve monitoring, enhanced patrolling and detection, and early warning systems to reduce the toll of attacks. 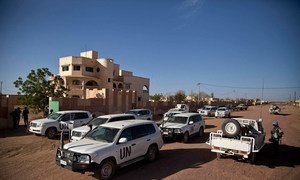 The United Nations Security Council has strongly condemned the attack by unknown assailants against a UN mission convoy in the region of Gao, northern Mali, on 24 September, that left three Bangladeshi peacekeepers dead and injured four others.