Noting the high speed of urbanization in Latin America and the Caribbean, the United Nations development arm in the region underlined the need to keep a close watch on the provision of services, equipment, mobility, housing and urban land to make sure they can match pace with the demand.

Speaking at the opening of the Cities Conference, Alicia Bárcena, the Executive Secretary of the UN Economic Commission for Latin America and the Caribbean (ECLAC) underscored that despite significant progress in reducing poverty, high degrees of socioeconomic residential segregation continues to persist in metropolises and large and small cities and towns.

“Socioeconomic segregation deepens inequity and contributes to social fragmentation and the high levels of violence that characterize many cities in [the region],” she said.

According to estimates, by 2030 – the timeframe to realize the Sustainable Development Goals (SDGs) – there could be more than 92 million additional people living in cities in Latin America and the Caribbean. The region is already the most urbanized developing region in the world.

Therefore, added Ms. Bárcena, it is necessary to guarantee the right to the city as a basic requirement for achieving sustainable development.

Concluding this Friday, the Cities Conference focuses on the regional implementation of the New Urban Agenda – the outcome of the Habitat III conference – to build inclusive, safe, resilient and sustainable cities.

Also at the inaugural session of the Conference, the head of ECLAC presented the Regional Action Plan for implementing the Habitat III outcome, proposing actions the countries of the region can take to ensure sustainable development of their cities and human settlements.

The Cities Conference has been organized by ECLAC, the UN Human Settlements Programme (UN-Habitat) and the General Assembly of Ministers and High-level Authorities of the Housing and Urban Development Sector in Latin America and the Caribbean (known by its Spanish acronym, MINURVI) in Santiago, Chile. 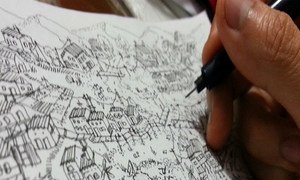 With 1.6 billion people living in inadequate housing, one billion of whom reside in slums and informal settlements, the United Nations is spotlighting the need for affordable homes on today's World Habitat Day, which also marks the official start of 'Urban October' – a month of worldwide celebrations and citizens' engagement in urban life.