UNICEF/Moreno
A house destroyed by Hurricane Irma in Loubiere, about 15 minutes’ drive from Roseau, capital of Dominica.
3 October 2017

Two weeks after Hurricane Maria devastated Dominica, the island nation’s recovery is becoming more evident as the main port has reopened and supplies of food, water and basic necessities are being regularly delivered to the people, a United Nations Resident Coordinator in the region said today, while stressing that are still “major challenges” ahead.

Briefing reporters at UN Headquarters in New York via telephone from Dominica, Stephen O'Malley, who is the UN Resident Coordinator for Barbados and for the Organization of Eastern Caribbean States, said “the [relief] operation is going in the right direction.”

According to the UN Office for Coordination of Humanitarian Affairs (OCHA), this is the fifth time on record that Dominica has taken a direct hit from a hurricane, but never has it faced a storm of such ferocity and strength. The hurricane brought life in Dominica to a standstill.

“What was shocking to me was that the island, which was known as ‘the nature island of the Caribbean,’ was almost totally brown [in the wake of the category 5 storm]. But now, the green has started to come back,” he said, noting that this progress is being matched on the ground, where the situation has begun to stabilize.

Garbage is now being collected and roads are opening up, noted Mr. O’Malley, adding that power has come back to the capital, Roseau, and a few other locations.

“We are able to reach almost everybody now, and we are getting food water and basic supplies out to people,” he said, cautioning at the same time that there will certainly be major challenges ahead.

He explained that the World Food Programme (WFP), working with the Government, distributed 60 metric tonnes of food last week to about 30,000 people, which is about half the population, and that more than 40 UN agency workers are on the ground to help the population.

The Government has asked the UN to work with it on a logistics plan to ensure regular delivery of relief supplies. “The Government is also focused on its recovery plan,” said Mr. O’Malley, noting that Dominican officials will head to Washington, D.C., and present the details during the Fall Meetings of the World Bank and the International Monetary Fund (IMF).

“What we need to do now in Dominica is keep up this regular supply of the basics for people. Make sure the electricity comes up; getting people’s water supplies up; and getting markets open again; as well as health centres,” he explained, adding that the Government was also looking at ways to “get the economy off the ground,” especially as the reconstruction effort would be massive.

He went on to recall that the UN, its partners and the Government has last week launched an emergency appeal for $31.1 million to reach 65,000 people over the next three weeks.

Responding to a question, he said that looking at the broad swathe of devastation across Dominica, Antigua and Barbuda, Turks and Caicos, and other islands and territories that were affected by this summer’s series of category five storms, Mr. O’Malley said the recovery, over time, could cost as much as $1 billion, though he stressed there were no exact figures.

“It's going to be a large-scale rebuilding effort that will take time,” he said. 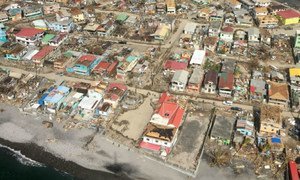 Emergency supplies from the United Nations food relief agency are being delivered to Dominica as people face “huge challenges in their lives” in the wake of the devastation wrought by Hurricane Maria, which ripped through the small Caribbean island last week.