With over half a million Rohingya refugees having fled their homes in Myanmar since violence erupted in late August, the top United Nations humanitarian official has underscored that the solution to the crisis needs to be found within Myanmar.

“The root causes of this crisis, as you know, are in Myanmar and the solutions need to be found in Myanmar,” Mark Lowcock, the UN Emergency Relief Coordinator, told journalists at a news conference in Cox’s Bazar, where many of those fled are taking refuge.

Noting that relief operations are gathering momentum, he informed the media that over the past six weeks, aid agencies have delivered more than nine million food rations, provided more than 300,000 with water and sanitation support, inoculated more than 100,000 children and provided some 50,000 with counselling and psycho-social support.

However, the sheer numbers of those in need mean that much more has to be done.

“The conditions in the camps are terrible. We need to do a lot more to scale up beyond what we have done so far,” added Mr. Lowcock, urging the international community to scale up their support.

VIDEO: In Bangladesh, UN humanitarian chief Mark Lowcock, highlights ongoing efforts to deliver aid to the Rohingya refugees who fled Myanmar and calls for international support to ramp up the operations.

He also announced that, as the manager of the UN Central Emergency Response Fund (CERF), he today allocated an additional $12 million to relief efforts and enable humanitarian partners kick-start life-saving critical health care, access to clean water and sanitation and camp management in the new sites.

These funds follow a previous CERF allocation of $7 million, bringing the total CERF support to $19 million.

According to the UN Office for the Coordination of Humanitarian Affairs (OCHA), the number of Rohingya refugees who have fled into Bangladesh from Myanmar has now reached 509,000.

UN agencies, including the Office of the UN High Commissioner for Refugees (UNHCR), the UN Children’s Fund (UNICEF), the World Health Organization (WHO) and the International Organization for Migration (IOM), humanitarian partners, together with the Bangladeshi Government have been working alleviate the plight of those uprooted from their homes as well as supporting the host community cope with the scale of the influx.

Yesterday, a diarrhoea treatment centre was opened at the Kutupalong Refugee Camp, where refugees who have been living since 1992 have taken in thousands of newcomers. By the end of this week, there will be a total of 80 beds at the centres in three locations, with two more centres planned to open next week.

UN agencies together with the authorities have conducted an immunization campaign for children to protect them against measles and have launched another one against cholera. Similarly, UN humanitarian staff along with refugee volunteers, are visiting refugee camps and informal settlements to identify people who may be sick but have not sought treatment. 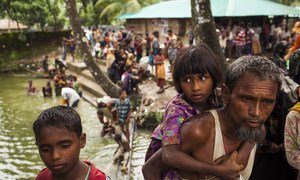 Amid the deepening refugee crisis in Bangladesh and its attendant toll on children, the United Nations Children's Fund (UNCEF) launched today an appeal for its emergency response to reach some 720,000 children – both in Rohingya refugee and host communities – with protection and assistance.