A taskforce of United Nations and international partner agencies is gearing up to launch an ambitious new strategy to combat cholera – aiming to reduce deaths by 90 per cent by 2030, the UN health agency announced today.

“This is a disease of inequality that affects the poorest and most vulnerable. It is unacceptable that nearly two decades into the 21st century, cholera continues to destroy livelihoods and cripple economies,” said Tedros Adhanom Ghebreyesus, Director-General of the World Health Organization (WHO).

With an estimated 95,000 cholera-related deaths, and another 2.9 million more people affected annually, the Global Task Force on Cholera Control (GTFCC), a diverse network of more than 50 UN and international agencies, academic institutions and others, will launch tomorrow ‘Ending Cholera: A Global Roadmap to 2030, which pinpoints endemic ‘hotspots’ where predictable cholera outbreaks occur year after year.

“WHO is proud to be part of this new joint initiative to stop deaths from cholera. This roadmap is the best way we have to bring this to an end,” said Mr. Tedros Adhanom.

The ‘Global Roadmap’ aims to align resources, share best practice and strengthen partnerships between affected countries, donors and international agencies. It underscores the need for a coordinated approach to cholera control with country-level planning for early detection and response to outbreaks. Through its implementation, up to 20 affected countries could eliminate cholera by 2030.

“Every death from cholera is preventable with the tools available today, including use of the oral cholera vaccine and improved access to basic safe water, sanitation and hygiene as set out in the Roadmap,” underscored the WHO chief.

VIDEO: UN World Health Organization and partners launch renewed strategy to reduce deaths from cholera by 90 per cent by 2030.

Although access to water and sanitation is recognized as a UN basic human right, today over two billion people worldwide still lack access to safe water and are potentially at risk of cholera. Weak health systems and low early detection capacity further contribute to the rapid spread of outbreaks.

Cholera disproportionally impacts communities already burdened by conflict, lack of infrastructure, poor health systems, and malnutrition. Protecting these communities before cholera strikes is significantly more cost-effective than continually responding to outbreaks. The introduction of the oral cholera vaccine has been a game-changer in the battle to control cholera – bridging the gap between emergency response and longer-term control.

With two WHO-approved oral cholera vaccines now available, for just $6 per person, individuals can be fully vaccinated for up to three years of protection.

The ‘Global Roadmap’ provides an effective mechanism to synchronize the efforts of countries, donors, and technical partners and underscores the need for a multi-sectoral approach to cholera control with country-level planning for early detection and response to outbreaks.

“We must act together. And we must act now,” asserted Mr. Tedros.

AUDIO: Head of World Health Organization says that every death from cholera was preventable and that the disease takes its greatest toll on the poor and the vulnerable. 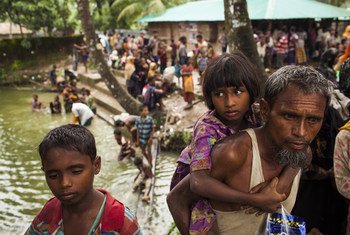 2 October 2017
Amid the deepening refugee crisis in Bangladesh and its attendant toll on children, the United Nations Children's Fund (UNCEF) launched today an appeal for its emergency response to reach some 720,000 children – both in Rohingya refugee and host communities – with protection and assistance.