Growing violence in south-eastern areas of the Democratic Republic of the Congo (DRC) has driven at least 3,360 refugees into northern Zambia over the past month, the United Nations refugee agency said today, warning that the humanitarian needs of the displaced could intensify on both sides of the border as the rainy season approaches.

“This is the largest influx of Congolese refugees into Zambia in the past five years,” Andrej Mahecic, a spokesperson for the Office of the UN High Commissioner for Refugees (UNHCR) told reporters in Geneva.

The refugees and asylum-seekers, mainly from the Congolese provinces of Haut-Katanga and Tanganyika, are escaping inter-ethnic clashes, as well as fighting between Congolese security forces and militia groups.

Some 60 per cent of those arriving in Zambia are children. Many show signs of malnutrition. Malaria, respiratory problems, dysentery and skin infections are common among the refugees.

The Zambian Government, UNHCR and the Zambian Red Cross are distributing hot and providing psycho-social support for survivors of sexual and gender-based violence. The humanitarian response team is delivering basic items, including tents, plastic sheeting, mosquito nets, blankets, buckets, hygiene kits and soap. Temporary shelters are being erected, boreholes are being drilled for drinking water and temporary latrines are being constructed.

Because of overcrowding, UNHCR has started work on a second transit facility to receive the growing number of new arrivals. A more permanent settlement will also be developed, with a social infrastructure where new arrivals will be able to stay for longer and develop some self-sufficiency.

Since the beginning of 2017, about 5,761 Congolese have crossed the border into Zambia. In total, there are 27,338 Congolese refugees and asylum seekers in that country.

Meanwhile, the International Organization for Migration (IOM) is scaling up its displacement assessments and emergency activities in Tanganyika as well as the Kasai province.

Increased ethnic violence throughout these provinces has uprooted more than 1.4 million people over the past few months, bringing the total number of internally displaced nationwide to some 3.4 million.

In Tanganyika province, the UN migration agency has carried out a survey in six of the 12 displacement sites in and around the city of Kalemie to collect information on the profile, needs and intentions of the displaced, including on their return and reintegration requirements.

The survey will be conducted at the remaining sites in the following weeks. According to IOM’s database, as of September 2017, an estimated 90,000 individuals reside in these sites in precarious conditions.

“The data collected during this assessment will provide useful information to IOM and its partners on the needs and intentions of internally displaced persons,” said IOM’s Displacement Tracking Matrix (DTM) expert, Stephanie Daviot. “It will also allow us to better target the assistance to those most vulnerable on the sites.”

In Central Kasai province, DTM has identified around 197,000 internally displaced persons and 490,000 returnees in 1,809 villages.

The DTM assessments in Central Kasai will continue over the upcoming weeks and provide an overview of the displacement situation in the entire province by the end of October. 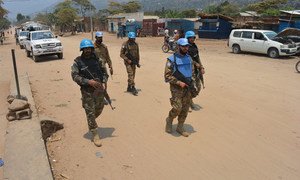 Responding to the worsening security situation near a major town in eastern Democratic Republic of the Congo (DRC), the United Nations mission in the country has deployed peacekeepers to deter any attacks on the city and to prevent escalation in clashes.