UNICEF/UN0125939/Solís
Iker, 9, and his sister Yeimire, 6, stand outside their home which was destroyed in an earthquake in San Andrés Hueyapan, Tetela del Volcán municipality, Morelos, Mexico, Thursday 21 September 2017.
2 October 2017

The United Nations Children's Fund (UNICEF) has called for putting children at the heart of public and private investment in reconstruction of the areas devastated by two major earthquakes in September.

The United Nations Children's Fund (UNICEF) has called for putting children at the heart of public and private investment in reconstruction of the areas devastated by two major earthquakes in September.

“The seven million children living in the worst affected areas of Chiapas, Mexico City, Morelos, Oaxaca and Puebla – especially the most vulnerable, who have lost their homes and schools – must be at the core of budgetary discussions in the country,” said Christian Skoog, UNICEF Representative in Mexico, in a press release.

UNICEF said that budgetary decisions linked to the reconstruction of areas affected by the recent earthquakes must guarantee full respect for the rights of children in health, education and housing for their affected families, without neglecting other fundamental rights such as the right to be protected against violence, abuse or exploitation.

Mexico has ratified the UN Convention on the Rights of the Child and has special legislation protecting the rights of children and adolescents and, as such, the country has made formal commitments to undertake all necessary legal and financial measures to guarantee the realization of those rights.

The Mexican Constitution also states that all Government decisions affecting children in the country must seek to protect their best interests in all circumstances.

In a post-disaster situation, accelerating and not just adjusting investment for children must be a priority if a country is to reach its long-term objectives for economic growth and social wellbeing, UNICEF said. 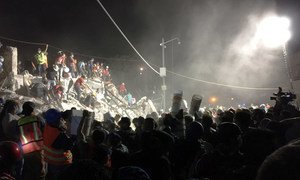 Secretary-General António Guterres voiced sadness at the loss of life and damage resulting from the earthquake that occurred in Mexico today, and expressed the readiness of the United Nations to assist.