Emergency supplies from the United Nations food relief agency are being delivered to Dominica as people face “huge challenges in their lives” in the wake of the devastation wrought by Hurricane Maria, which ripped through the small Caribbean island last week.

“Dominica has been badly battered and needs to be rebuilt,” said World Food Programme (WFP) Regional Director for Latin America and the Caribbean, Miguel Barreto.

The mountainous island has suffered nearly 30 deaths, about 80 per cent of its buildings damaged and many roads blocked or impaired.

“We're working with the Government to support the people who are facing huge challenges in their lives” added Mr. Baretto, who has visited in recent days.

Some 10 metric tons of WFP high-energy biscuits were transported by ship to the eastern Caribbean island this week and then delivered to communities in the remote interior by helicopter and to coastal communities by boat.

Overall, WFP plans to provide a range of food assistance to some 25,000 people for three months as it discusses with the Government a system to supply hurricane-affected people with food vouchers to be used in local markets once they reopen.

WFP is also providing critical logistics, air service and telecommunications support to Dominica and the humanitarian relief response. Its Emergency Telecommunications Team – with expert support from the Ericsson Response Team and the Government of Luxembourg – has set up connectivity in Dominica to some 400 registered users including the Government Emergency Operations Centre, the island's airports and hospitals, and the Dominican, Venezuelan and French fire brigades.

Mr. Barreto and the UN Resident Coordinator for Barbados, Stephen O'Malley, visited some of the worst-hit areas and have held discussions with Dominica's Prime Minister, Roosevelt Skerrit.

“We've been talking to the Government about how to help them get their systems up and running again,” said Mr. O'Malley. “People want to go back to their normal lives and we can help them do that.”

The UN food agency's emergency efforts are part of a larger UN operation to provide a range of assistance including disaster relief, humanitarian coordination, shelter and water.

UNHRD has been airlifting critical emergency supplies, including mobile storage units and pallets, tarpaulins, boats, and electric generators while UNHAS has been providing regular flight services to humanitarian workers, government officials and partners.

For its part, the UN Office for the Coordination of Humanitarian Affairs (OCHA) pointed out in a press statement that while this is the fifth time on record that Dominica has taken a direct hit from a hurricane, it has never faced a storm of such ferocity and strength.

One of the Eastern Caribbean's poorest countries, Dominica's poverty rate is estimated at 28.9 per cent, or approximately 21,000 people, with some of the hardest-hit parishes also being among the poorest.

In consultation with the Government, the humanitarian community launched today a Hurricane Maria Flash Appeal for Dominica, asking for $31.1 million to reach 65,000 people over the next three months to address challenges, such as a lack of fresh running water and electricity along with road damage and communication black-outs.

♦ Receive daily updates directly in your inbox - Subscribe here to a topic.
♦ Download the UN News app for your iOS or Android devices.
Dominica 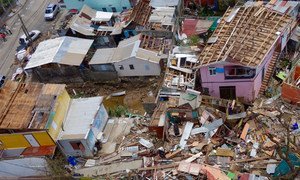 A United Nations disaster assessment official visiting the small island nation of Dominica, which was battered by Hurricane Maria, said today that an estimated 60,000 to 65,000 people, or 80 per cent of the total population, have been affected and that food and water are the most immediate needs.