The scale up of international assistance to the Lake Chad Basin this year has averted a famine in north-east Nigeria, even though millions of people are still suffering, according to the United Nations aid chief.

Having visited Niger and Nigeria earlier this month, the Under-Secretary-General for Humanitarian Affairs, Mark Lowcock, told reporters today at UN Headquarters in New York: “There are still millions of people who have suffered a lot and continue to suffer, many of them just a step away from starvation.”

He said that in field visits to Ngagam in Diffa – “the poorest region in the poorest country in the world” – and to Maiduguri, Pulka, and Gwoza in Borno state in Nigeria, he met “extremely vulnerable people” displaced by conflict.

“Those people want to go home, they want a chance to rebuild their lives. But they want to do that when it’s safe to do so,” stressed Mr. Lowcock.

About 1.8 million people in Niger are food-insecure. Some 800,000 children are affected by acute malnutrition and almost 250,000 people are either internally displaced persons, returnees or refugees from Nigeria, he highlighted.

The crisis in the Lake Chad Basin, which covers Cameroon, Niger, Nigeria and Chad,

is complex as countries grapple with insecurity, climatic shocks, extreme poverty, the legacy of inadequate governance across vast parts of the region.

“But the way forward is also clear,” he asserted, highlighting the need to sustain the effective humanitarian response, and to ensure see better protection for people.

“Access has improved in many towns, but there’s also been a recent upsurge in horrific attacks on civilians in all four countries. In Niger, hostage-taking has increased, while in Nigeria children have been used as ‘human bombs,’” he said.

Turning to other areas of the world, Mr. Lowcock said “so far in Somalia, famine has been averted” while in South Sudan, there was “a famine declaration in a couple of counties in Unity state, that affected about 50,000 people earlier in the year, but that situation was brought under control pretty quickly.”

Calling it the world’s biggest humanitarian crisis, Mr. Lowcock pointed out that in Yemen, “we have so far again averted formal famine declaration, but the levels of suffering in Yemen are really astronomical. I mean, there’s a really dreadful situation.” 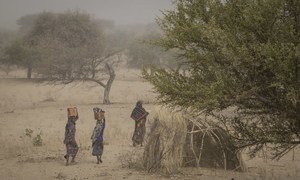