UNICEF/Alessio Romenzi
A child stands in a room where women and children sleep on old mattresses laid on the floor at a detention centre in Libya.
28 September 2017

The world has every interest in managing migration better, given the expanding global population and the huge increase in people on the move.

This message was underlined by Louise Arbour, the United Nations Special Representative for International Migration, who was in Beirut, Lebanon, to address pressing issues related to the movement of people in the Arab region.

Experts gathered midweek at the UN Economic and Social Commission for Western Asia (ESCWA) to identify ways of supporting the most vulnerable migrants.

This information will feed into a new compact for migration to improve the situation of millions who have chosen – or felt forced – to leave their homes.

“We know there are a lot of differences around the world but when you see such striking differences even within a region it brings home the idea that the compact is going to have to be very smart to have appeal and to be implementable,” Ms. Arbour underlined.

Read full story
As the world continues to experience unprecedented waves of migration, United Nations experts are highlighting the importance of regional solutions to ensure that people and societies can benefit from this global phenomenon.

“Migration is a reality that crosses walls and barbed wire,” said Mohamed Ali Alhakim, the Executive Secretary of the UN Economic and Social Commission for Western Asia (ESCWA).

Speaking at its headquarters in Beirut, Lebanon at the opening of a two-day meeting on international migration, Mr. Alhakim stressed that to manage this transboundary reality, “regional and international cooperation must also cross borders.”

As one of the five regional commissions of the United Nations, ESCWA serves as a think tank for its 18 Member States; it brings together experts who work at the regional level to tackle global challenges, while still considering different national realities. Helping countries achieve the 2030 Agenda for Sustainable Development has been at the heart of its focus.

“Is immigration not the oldest poverty reduction plan?” continued Mr Alhakim, noting that remittances in the Arab region amount to more than $50 billion a year, more than four times the official development assistance (ODA) received by Arab countries.

Alongside its partners such as the International Organization for Migration (IOM), ESCWA is facilitating discussions on what should be prioritized for the Arab region in the Global Compact for Migration. This agreement, the first of its kind, is expected to offer solutions to better manage human mobility.

“The Arab region is particularly important because it's at the centre of much of the conflict, it's a major labour migration area, and it's also an area that has sent a lot of people elsewhere in the world particularly to Europe, many of whom encountered difficulties along the way,” explained William Lacy Swing, the Director General of IOM.

Meanwhile, Louise Arbour, the UN Special Representative for International Migration, highlighted how much of a challenge it will be for the global compact on migration to be relevant to everyone; in the Arab region alone, countries have very different economic, social and environmental profiles.

“We know there are a lot of differences around the world but when you see such striking differences even within a region it brings home the idea that the compact is going to have to be very smart to have appeal and to be implementable,” she underlined. 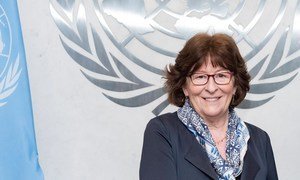 Recognizing that the issue of large movements of refugees and migrants is too vast for any one country to handle on its own, the United Nations convened a meeting of world leaders in September 2016 with the aim of finding durable solutions. At the summit, all 193 Member States came together around one plan, the New York Declaration, expressing their political will to save lives, protect rights and share responsibility on a global scale.