UN Photo/Ariana Lindquist
Staffan de Mistura, special envoy of the Secretary-General for Syria speaks at the Security Council Meeting on the situation in the Middle East.
27 September 2017

The United Nations is set to convene the next round of the intra-Syrian talks in Geneva by the end of October or in early November, the UN mediator told the Security Council today.

“The time has come for the focus to return to Geneva, and the intra-Syrian talks under the auspices of the United Nations,” said UN Special Envoy for Syria Staffan de Mistura, urging the Government and the opposition to assess the situation with realism and responsibility to the Syrian people and prepare to participate in the talks without preconditions.

Mr. de Mistura said the Government should show a genuine interest in having negotiations about credible, inclusive local and central governance, a schedule and process for a new constitution, and UN-supervised elections.

For its part, the opposition should show its unity and readiness to speak in one voice, he said, urging opposition groups to seize the opportunity presented by Saudi Arabia to convene a conference for them to overcome differences.

“Let me caution both sides and their backers against illusions of victory or dreams of shortcuts,” he said. “There is no substitute for an internationally supported process based on a comprehensive and inclusive approach that also helps Syrians to re-discover a modicum of trust and social cohesion after the bitterest of conflict.”

Following the 10-15 July round of the UN-facilitated talks, the envoy said the conference ended with incremental progress but no breakthrough.

Intra-Syrian talks focus on the “four baskets”: a credible non-sectarian transitional government; a future constitution; early and free parliamentary elections within 18 months; and a united war against terrorism within Syria.

Briefing the Council on the humanitarian situation there was Under-Secretary-General for Humanitarian Affairs Mark Lowcock, who said “Syria continues to face deep and difficult challenges, and the Syrian people remain trapped in a cycle of violence that must be broken.” Following a comprehensive UN review, Deir ez-Zor and the 93,500 people in the city are being removed from the list of those besieged, he said, explaining that after three years of besiegement by the Islamic State of Iraq and the Levant (ISIL/Da'esh), Syrian Government forces in early September gained road access, marking the end of costly airdrops.

So far in September, 9,000 people in the three besieged towns of Foah, Kefraya and Yarmouk have been reached, and 25,000 people were reached in East Harasta, Misraba and Modira. In total, under the August and September access plan, the UN has reached 280,500 of the 1.23 million people it requested to provide assistance to, he added. 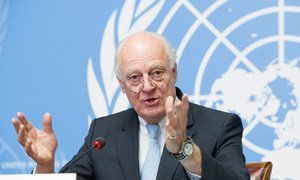 Speaking to reporters in the early hours of Saturday in Geneva, United Nations Special Envoy said that the latest round of the intra-Syrian talks ended with “incremental progress.”