UNICEF/Solís
In Oaxaca, Mexico, UNICEF staff make a rapid assessment of the damage in San Pedro Huilotepec caused by the earthquake.
27 September 2017

To help children and families affected by the series of natural disasters that have devastated countries in Latin America and the Caribbean, the United Nations Children’s Fund (UNICEF) today said it has scaled up its humanitarian response the region.

“With four successive hurricanes – including Hurricane Irma, the largest ever recorded over the Atlantic – and two major earthquakes in Mexico, the past few weeks have been relentless,” he added.

In the past month, four major hurricanes – Category 3 or higher – have churned through the Caribbean and Atlantic Ocean. Hurricanes Irma, Jose, Katia and Maria caused major damage to island nations in the Caribbean, as well as continental North and Central America, devastating the lives of millions of people and leaving hundreds of thousands homeless and displaced.

Since two earthquakes – 12 days apart – caused widespread damage and destruction in central Mexico, the region has experienced over 4,000 aftershocks, including a 6.1 magnitude quake as recently as 23 September. Up to seven million children live in the affected areas and thousands have been left homeless, with no access to basic services.

“It’s absolutely vital that children who have lived through these traumatic events get the psychosocial support they need,” said UNICEF Mexico Ambassador Thalia, who visited UNICEF operations centre this week to learn more about UNICEF’s response.

“Through child-friendly spaces UNICEF is able to provide children with a safe place, to play, learn and begin to heal their psychological wounds,” Ambassador Thalia underscored.

For children and families affected by the hurricanes, UNICEF is working with partners and local governments to provide immediate relief including access to safe water, sanitation and hygiene supplies, provision of psycho social support for children and working to ensure children and able to get back into education as soon as possible.

To support its humanitarian response in Mexico, Cuba, the Eastern Caribbean and Haiti,

UNICEF is appealing for $18.1 million. 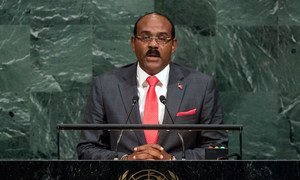 The Prime Minister of Antigua and Barbuda, Gaston Alphonso Browne, told the United Nations General Assembly today that after the largest storm ever in the Atlantic Ocean, “the island of Barbuda is decimated; its entire population left homeless; and its buildings reduced to empty shells.”