With tens of millions of human trafficking victims worldwide, “now is the time to stand together and stamp out this abominable practice,” Secretary-General António Guterres today told a high-level meeting at which Member States adopted a political Declaration reaffirming their commitment to implement a United Nations action plan to end the scourge.

“Human trafficking is all around us, in all regions of the world,” said Mr. Guterres, referring to such practices as forced labour, sexual servitude, recruitment of child soldiers and other forms of exploitation and abuse.

The Assembly's high-level meeting, convened to examine progress achieved and challenges remaining in the implementation of the seven-year-old Global Plan of Action to Combat Trafficking in Persons, opened today and closes tomorrow.

In the Declaration, adopted without a vote, UN Member States demonstrated their strong political will to take decisive concerted action to end the heinous crime.

As millions of children, women and men spill out of their countries towards safety, they find themselves at the mercy of merciless people

“As millions of children, women and men spill out of their countries towards safety, they find themselves at the mercy of merciless people,” Mr. Guterres said.

These criminal networks are global, well-organized, technologically savvy, and highly proficient in taking advantage of gaps in governance and weaknesses in institutions, he added.

Fighting human trafficking requires greater use of relevant instruments, including the UN conventions against transnational organized crime and against corruption, and next year's expected adoption by the General Assembly of a global compact on safe, orderly and regular migration is a further potential milestone, he said.

The 2030 Agenda for Sustainable Development, adopted by Member States in 2015, also addresses some of the root causes that make people vulnerable to trafficking. Often, trafficking is abetted by poverty and inequality.

Also addressing the meeting, Yury Fedotov, Executive Director of the UN Office on Drugs and Crime (UNODC), said “this appraisal and the adoption of the political Declaration can help us take this commitment forward and sharpen responses to an odious crime that continues to exploit and victimize the most vulnerable, in all parts of the world.”

To build a robust evidence base, UNODC is currently working with the academic community to develop innovative methodologies to measure the size and scope of the trafficking problem, he added.

AUDIO: Meeting to appraise the UN Global Plan of Action hears moving testimony from a victim of human trafficking. 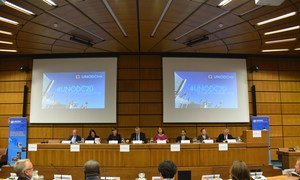