The United Nations Security Council has strongly condemned the attack by unknown assailants against a UN mission convoy in the region of Gao, northern Mali, on 24 September, that left three Bangladeshi peacekeepers dead and injured four others.

Through a press statement, the Council expressed deepest condolences and sympathy to the families of the victims, the Government of Bangladesh and the UN Multidimensional Integrated Stabilization Mission in Mali (MINUSMA), according to a statement.

Calling on the Malian Government to swiftly investigate the attack and bring the perpetrators to justice, Council members underlined that “attacks targeting peacekeepers may constitute war crimes under international law.” Moreover, they stressed that involvement in planning, directing, sponsoring or conducting attacks against MINUSMA peacekeepers constitute a basis for sanctions designations pursuant to Council resolutions.

The members of the Council went on to reaffirm that terrorism in all its forms and manifestations constitutes one of the most serious threats to international peace and security, and underlined the need to bring perpetrators, organizers, financiers and sponsors of the reprehensible acts of terrorism to justice.

Reiterating full support for MINUSMA and the French forces that support it, the Council also reiterated “strong support” for Mission chief Mahamat Saleh Annadif, and recognized the determination of the Group of Five Sahel States (G5) – Burkina Faso, Chad, Mali, Mauritania and Niger – to address the impact of terrorism and transnational organized crime, including through the conduct of cross-border joint military counter-terrorist operations.

The Council members went on to express their concern over the security situation in Mali along with the transnational dimension of the terrorist threat in the Sahel region. They urged the Malian parties to fully implement the 2015 Agreement for Peace and Reconciliation without further delay, noting that its full implementation and the intensification of efforts to overcome asymmetric threats can contribute to improving the security situation across the country. 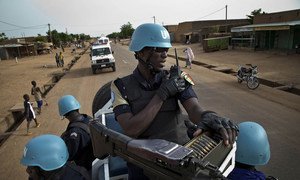 Secretary-General António Guterres has condemned today's attack against a convoy of the United Nations mission in northern Mali that killed three Bangladeshi peacekeepers.