Although efforts over the past few years to reach a political solution to the Afghan conflict have led to little progress, the top United Nations envoy in the country today reported a renewed interest in political engagements for peace.

“I am convinced that a political settlement is possible,” Tadamichi Yamamoto, the Secretary-General’s Special Representative for Afghanistan, told the UN Security Council in his latest briefing, citing progress, still daunting challenges, and opportunities for political engagement.

“We should not let another fighting season begin without progress towards substantive negotiations. Opportunities will be lost, with the cost paid in thousands of Afghan lives and at tremendous financial cost.

“I appeal to the countries in the region to conduct a profound reassessment of their strategic interest and renew work towards a viable peace process leading to an Afghan-owned solution to the conflict. If requested, the United Nations stands ready to assist all parties to achieve this goal.”

Mr. Yamamoto said the United States announcement in August of a continuing, conditions-based commitment has removed some uncertainties, while regional countries and key States are actively seeking to promote regional engagements for peace, adding that preparations leading to a peace process are complex and efforts must be pragmatic and flexible.

“The security situation continues to be a major concern,” he stressed, citing the persistence of the Islamic State of Iraq and the Levant (ISIL or Da’esh) in the east of the country, with new Da’esh activity reported in the north as well as in Kabul, the capital, making the situation more complex.

“The human cost of this violence is high, disproportionately impacting women and children,” he said, noting that current Afghan security planning foresees that by 2020 Afghan forces will reach sufficient strength to reverse recent Taliban gains, while the Taliban continue to resist appeals to negotiate with the Afghan Government.

At the current rate of deaths due to conflict, by 2020 tens of thousands more Afghans will have been killed.

Mr. Yamamoto, who also heads the UN Assistance Mission in Afghanistan (UNAMA), reported some progress on key reforms, with the battle against corruption beginning to bear results after many years in which this debilitating issue was ignored.

There has also been progress on the organization of parliamentary and district council elections scheduled for next July. “It is imperative that we hold the elections according to the plan,” he stated, noting that timely elections will enhance the credibility of the political system. 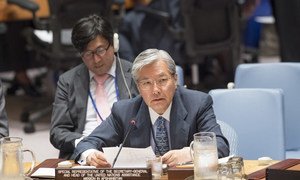