The human rights situation in Crimea has significantly deteriorated under Russian occupation, a United Nations report says, detailing how residents there were affected when Ukrainian laws were substituted by those of Russia, including the imposition of Russian citizenship.

“Grave human rights violations, such as arbitrary arrests and detentions, enforced disappearances, ill-treatment and torture, and at least one extra-judicial execution were documented,” notes the report published today by the Office of the UN High Commissioner for Human Rights (OHCHR).

“The citizenship issue has had a major impact on the lives of many residents of Crimea,” High Commissioner Zeid Ra’ad Al Hussein said in a press release.

“As the report states, imposing citizenship on the inhabitants of an occupied territory can be equated to compelling them to swear allegiance to a power they may consider as hostile, which is forbidden under the Fourth Geneva Convention,” the High Commissioner added.

The report reiterates that the imposition of Russian citizenship affected tens of thousands of people, particularly three groups: those who formally rejected citizenship; civil servants who had to renounce their Ukrainian citizenship or lose their jobs; and Crimean residents who did not meet the legal criteria for citizenship and became foreigners.

Imposing citizenship on the inhabitants of an occupied territory can be equated to compelling them to swear allegiance to a power they may consider as hostile, which is forbidden under the Fourth Geneva Convention Zeid Ra’ad Al Hussein.

“Persons holding a residency permit and no Russian Federation citizenship do not enjoy equality before the law and are deprived of important rights,” the report says. “They cannot own agricultural land, vote and be elected, register a religious community, apply to hold a public meeting, hold positions in the public administration and re-register their private vehicle on the peninsula.”

The report makes 20 recommendations to the Russian Government, urging it to respect “its obligations as an occupying power,” uphold human rights for all, and effectively investigate alleged torture, abductions and killings involving members of the security forces and Crimean self-defence. 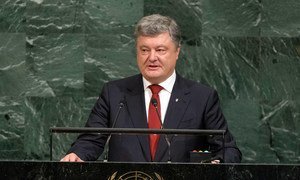 UN has ‘narrow window of opportunity’ to turn the tide on raft of global ills, warns Ukraine President

Transnational terrorism and use of force international relations, the proliferation of weapons of mass destruction, human rights violations and environmental fragility are but a few of today’s global challenges, the President of Ukraine to the United Nations General Assembly, calling on the world body to “act now” to tackle those and pressing concerns