Citing the continuing deterioration of the security situation in the sub-Saharan Sahel, regional leaders at the General Assembly’s annual general debate today called on the United Nations to provide sufficient resources to the regional G5 Sahel joint force to combat the scourge.

Beyond attacks perpetrated by Boko Haram, Mr. Taha also highlighted a host of other regional concerns including climate change and the drying up of Lake Chad upon which 50 million people depend for their livelihoods, all of which contribute to the massive migration crisis.

“Not to aid the G5 Sahel and to allow the situation in Mali to degenerate further into implosion would be a mistake that Member States should not commit,” he said.

♦ Receive daily updates directly in your inbox - Subscribe here to a topic.
♦ Download the UN News app for your iOS or Android devices.
General Assembly|sahel 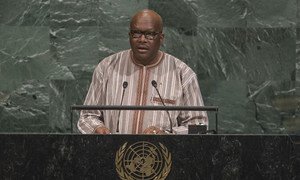 Highlighting the dangers posed by terrorism in Africa’s sub-Saharan Sahel region, African leaders mounted the podium of the United Nations General Assembly today to appeal for the resources needed to make the multinational force set up to counter the scourge fully operational