UNHCR/Keane Shum
Rohingya refugees navigate their way around the Kutupalong extension site where shelters have been erected on land allocated by the Bangladesh Government.
22 September 2017

At the request of Bangladeshi authorities, the Office of the UN High Commissioner for Refugees (UNHCR) is speeding up the distribution of plastic sheeting to get as many people as possible under at least minimal protection from monsoon rains and winds.

“On Saturday, we plan to begin distribution of kitchen sets, sleeping mats, solar lamps and other essential relief items to an initial 3,500 families who have been selected by community leaders,” UNHCR spokesperson Andrej Mahecic told a press briefing in Geneva.

Refugee volunteers and contractors are helping newly arriving refugees moving into emergency shelter, but it is vital that UNHCR site planners have the opportunity to lay out the new Kutupalong extension in an orderly way to adequately provide for sanitation and to make sure structures are erected on higher ground not prone to flooding.

In total, more than 700,000 Rohingya refugees are now believed to be in Bangladesh; 420,000 of them have arrived in the past three and a half weeks.

UN High Commissioner for Refugees Filippo Grandi will be in Bangladesh this weekend to get a first-hand look at the scale of the crisis as well as UNHCR’s response, and meet with refugees.

Meanwhile, the World Health Organization (WHO) said that camps are bursting at the seams and there is a huge risk of disease.

“WHO is very concerned about the health situation on the border between Myanmar and Bangladesh, given the very crowded settlements, most of them spontaneous,” said Fadela Chaib, the agency’s spokesperson in Geneva.

“It has been challenging to roll out the emergency response, not least because of the difficult terrain and the very heavy rains, and the fact that the population in question is dispersed, mobile and often injured,” she added.

Ms. Chaib said the greatest risk is related to water and sanitation, with poor conditions increasing the risk of vector- and water-borne diseases. Cholera, which is endemic in Bangladesh, cannot be ruled out. WHO has provided some 20,000 people with water purification tablets.

“Immunization rates among children is very low,” she said, explaining that when children are malnourished and exposed to the elements, the risk of childhood diseases such as measles are very high.

WHO, together with other agencies, recently launched an immunization campaign against polio and measles. Owing to the poor weather conditions and the continuous influx of people, the campaign has been extended.

Around 40 WHO staff have been dispatched to Bangladesh, and the agency will deploy a team of epidemiologists over the weekend to support risk assessment for infectious diseases.

For its part, the World Food Programme (WFP) has now reached at least 385,000 people with food aid as of today. Together with its partners, WFP feeds more than 5,000 people daily in the area.

“The situation is dire and WFP is on the frontlines trying to reach people as quickly as possible,” spokesperson Bettina Luescher told reporters in Geneva. 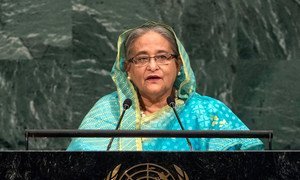 Myanmar must stop “ethnic cleansing” in Rakhine state, and “safe zones” should be created inside that country to protect all civilians, under the supervision of the United Nations, Bangladeshi Prime Minister Sheikh Hasina told the General Assembly today