“The world keeps changing,” he told the 72nd annual general debate, citing last December’s Assembly resolution on the ‘promotion of a democratic and equitable international order,’ which deemed unacceptable interference in the internal affairs of sovereign States, which the US under former President Barak Obama voted against.

“It is gratifying to note, as the US President Donald Trump unequivocally stated from this podium Tuesday, that it is important to comply with the principles of sovereignty in the international affairs; it is necessary to ensure leadership by example and not impose one's will on other nations,” he said.

“I believe that anyone can sign under these words, especially, if the US foreign policy is conducted precisely on this basis. Sovereignty, refraining from interference into internal affairs, equality of people and mutual respect – Russia has always adhered to these principles and will continue to uphold them,” Mr. Lavrov underscored.

He lamented that Russia’s Western partners have not reciprocated Moscow’s good-faith efforts to eliminate the legacy of the Cold War, and have instead chosen “the path of reckless eastward NATO expansion and provoking instability in the post-Soviet space and encouraging anti-Russian sentiments. This policy is precisely the root cause of the protracted conflict in South-Eastern Ukraine,” he added.

“However, the build-up of military hysteria is not only a dead-end but also deadly,” he stated. “It goes without saying that all UN Security Council resolutions must be implemented. But all of them, along with sanctions, contain provisions on the need to resume talks.”

♦ Receive daily updates directly in your inbox - Subscribe here to a topic.
♦ Download the UN News app for your iOS or Android devices.
General Assembly|Russia 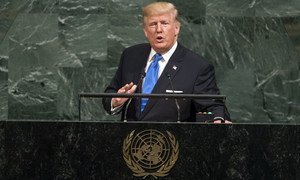 Noting that the present world is one that offers both immense promise and great peril, the President of the United States told global leaders at the United Nations that it was “entirely up to us” to either lift the world to new heights, or let it fall into a valley of disrepair.