UNICEF/UN066040/Souleiman
In Al-Tabqa city in the Syrian Arab Republic, boys fill their jerrycans with dirty water (May 2017).
21 September 2017

Sustained international attention and engagement is vital as the Syrian conflict moves into its seventh year and the suffering of civilians shows no signs of waning, a top United Nations official said today.

“Life-saving humanitarian needs remain enormous and the delivery of assistance through the most direct routes remains critical,” Under-Secretary-General for Humanitarian Affairs Mark Lowcock told the High-level Meeting on Syria, held in the margins of the General Assembly.

Mr. Lowcock, who is also UN Emergency Relief Coordinator, reported that de-escalation has resulted in calm in some parts of the country. But an increase in operations in the east to combat the Islamic State of Iraq and the Levant (ISIL/Da’esh) has caused fresh suffering and displacement.

“From Raqqa, to Idleb, to Deir ez-Zor, civilians continue to face serious protection concerns as fighting and access constraints continue. This year alone, another one million people have been internally displaced,” he stated, adding that all parties to the fighting must be pressured to respect international humanitarian law.

In April in Brussels, some $6 billion was pledged by over 40 governments for the humanitarian response this year, with a further $3.7 billion pledged for 2018.

“There was also a clear agreement that the civilians whose lives have been destroyed by years of conflict must remain at the forefront of the international community’s agenda,” said Mr. Lowcock.

“That was expressed by voicing unconditional support to meet humanitarian needs inside Syria and the region; and by highlighting the importance of support for early recovery and resilience-building for displaced Syrians and their hosts.”

Mr. Lowcock stressed the need for all pledges to UN-coordinated appeals for Syria and the region turned into contributions, noting that the humanitarian response plan for inside Syria is only 36 per cent funded, while the regional refugee and resilience plan just 39 per cent funded.

“We can and we must do better for the Syrian people,” he stated. “Ultimately of course, the only sustainable way to address the humanitarian crisis is to end the conflict through a credible political agreement.”

Among the other participants at the meeting were the UN Special Envoy for Syria Staffan de Mistura and the UN High Commissioner for Refugees Filippo Grandi. 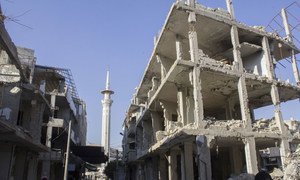 Calling for creative ways to work towards peace in Syria, the United Nations Special Envoy today outlined the political path forward, which includes holding another round of the so-named Astana talks and behind-the-scenes efforts by the international community.