There is no period more critical in a child's development than the first 1,000 days of life, and yet 32 countries – including Bangladesh and the United States – lack three basic national policies to support parents of babies and young children, says a new United Nations report issued today.

These policies, UNICEF noted in a news release, help parents better protect their children and provide them with better nutrition, play and early learning experiences in the crucial first years of life when the brain grows at a rate never to be repeated.

The report states that around 85 million children under five are growing up in 32 countries without any of the three critical policies in place; 40 per cent of these children live in just two countries – Bangladesh and the US.

“What's the most important thing children have? It's their brains. But we are not caring for children's brains the way we care for their bodies – especially in early childhood, when the science shows that children's brains and children's futures are rapidly being shaped,” said UNICEF Executive Director Anthony Lake.

“We need to do more to give parents and caregivers of young children the support they need during this most critical period of brain development.”

The report also points out that millions of children under five live in areas affected by conflict, are starved of nutritious food, and are deprived of stimulating activities fundamental for healthy brain growth.

Urging governments to invest in children and their families, UNICEF called for actions to support early childhood development. Among these is to make family-friendly policies, including two years of free pre-primary education, paid parental leave and paid breastfeeding breaks, a national priority.

“Policies that support early childhood development are a critical investment in the brains of our children, and thus in the citizens and workforce of tomorrow – and literally the future of the world,” said Mr. Lake.

At the beginning of 2017, UNICEF launched the #EarlyMomentsMatter campaign, aimed at raising awareness about the critical impact that early experiences have on children's brain development during their first 1,000 days of life. 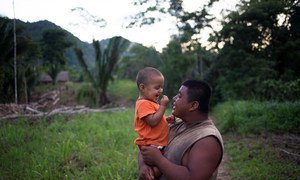 Today marks the launch of a new United Nations Children’s Fund (UNICEF) campaign, #EarlyMomentsMatter, aimed at raising awareness about the critical impact that early experiences have on children’s brain development during their first 1,000 days of life.