No one country can tackle the problems associated with migration, Libya tells global leaders

UN Photo/Cia Pak
Faiez Mustafa Serraj, President of the Presidency Council of the Government of National Accord of Libya, addresses the general debate of the General Assembly’s seventy-second session.
21 September 2017

Recalling the situation in Libya since the 2011 revolution, Faiez Mustafa Serraj, the President of the Presidency Council of the Government of National Accord said that international support is essential to ensure progress in the country.

The Political Agreement which had been reached between the different parties after two years of negotiations remains the cornerstone for building new political institutions and transition in the country, he said, noting that the aim is to ensure broad and inclusive participation; the transition is vital to achieve stability.

In his address to the 72nd annual general debate at the United Nations General Assembly, Mr. Serra announced that all parties in the country are ready to meet the challenges confronting Libya.

He further informed that those displaced within Libya are now returning to their homes and that the Government is working to establish stability.

On the economic side, he announced that oil production reached about one million barrels per day and urged for the resumption of international financial assistance as well as the repayment of Libyan financial assets abroad which have resulted in enormous losses to the country.

Speaking on migration and human trafficking, he expressed that no one country can tackle the issue by itself and urged for international support for his country to address the challenges it confronts.

Also in his address, Mr. Serraj reiterated the need for strategic partnerships with friendly countries, and drew attention to the ongoing work to unify the country’s security forces and to make them capable of confronting the threats posed by terrorists.

He also informed the General Assembly of adoption of new laws, with the technical support of the UN, to ensure protection of human rights in the country.

♦ Receive daily updates directly in your inbox - Subscribe here to a topic.
♦ Download the UN News app for your iOS or Android devices.
General Assembly|libya 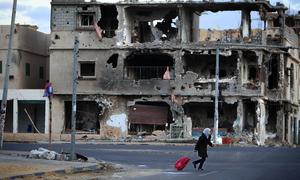 Secretary-General António Guterres today launched a United Nations strategy to help bring about peace and stability in Libya and end a protracted crisis that has caused immense suffering and contributed to instability beyond the country’s borders.