UNICEF/Giovanni Diffidenti
A girl crosses a street in the city of Sirte, Libya. Much of the city was destroyed during weeks of fighting there.
20 September 2017

Secretary-General António Guterres today launched a United Nations strategy to help bring about peace and stability in Libya and end a protracted crisis that has caused immense suffering and contributed to instability beyond the country’s borders.

“It is my deep belief that there is an opportunity for a political solution in Libya,” Mr. Guterres said at the high-level event held on the margins of the annual debate of the General Assembly, adding that everyone needs to come together to ensure that this opportunity translates itself into a reality.

“The Libyan people have suffered too much,” stated the Secretary-General, voicing deep concern about the political, security, socio-economic and humanitarian situation in the North African nation.

“Looking ahead, it is crucial to fashion a Libyan-led and Libyan-owned political solution.”

The other priorities are: building credibility with the Libyan people; strengthening security arrangements and national security architecture; coordinating international engagement, including the efforts of Libya’s neighbours, so that all are part of a single common agenda; improving socio-economic conditions and the provision of goods and services, for a true peace dividend to be felt by the people; supporting migrants and upholding long-standing international norms on migration; and securing predictable support for humanitarian assistance.

The Secretary-General added that his Special Representative for Libya, Ghassan Salamé, will strive to unify and consolidate the various initiatives, and to promote dialogue towards the formation of a unified national government and the immediate end of parallel institutions.

Secretary-General António Guterres addresses the High-level Event on Libya. Listening are Fayez Mustafa Serraj (left), President of the Presidency Council of the Government of National Accord of Libya and Ghassan Salame (right), Special Representative of the Secretary-General and Head of UNSMIL. UN Photo/Mark Garten

Elaborating on next steps, Mr. Salamé said that the first stage must be to amend the Libyan Political Agreement, which in its current state is not adequate. Once the amendments have been adopted, the second stage is a National Conference that will open the door to “those ostracized, those self-marginalized, those players who have been reluctant to join the political process.”

Following the conference, the House of Representatives would be expected to prioritize the legislation for a constitutional referendum, as well as presidential and parliamentary elections. In parallel, the Constitutional Drafting Assembly will review and refine its work, taking into consideration the observations and suggestions expressed during the National Conference.

Mr. Salamé, who heads the UN Support Mission in Libya (UNSMIL), noted that this political sequence must be underpinned by concrete progress in a number areas, including preparation by the High National Election Commission for electoral events; dialogue with armed groups with the aim of integrating their members within the political process and civil life; an initiative to unify the national army; and continued and intensified local reconciliation efforts.

“This process, in all its stages, is indeed meant to prepare the proper conditions for free and fair elections, which will usher Libya into institutional and political normalcy,” said the Special Representative.

“There is much to be done, and this plan is certainly ambitious. However, if the Libyan people can come together in the spirit of compromise and together write a new common national narrative, this plan is achievable.” 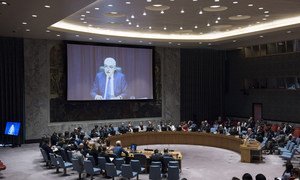 Libya's future prosperity and stability depends on the international community further strengthening and unifying its efforts on behalf of the whole country, as well as Libyans themselves “seizing the window of opportunity” that is before them to ensure peace, the head of the United Nations mission there said today.