Giles Clarke/OCHA
A young boy runs with his tyre past buildings damaged by airstrikes in Sa'ada Old Town, Yemen. Up until August 2015, this area was the home of Sa'ada's oldest market with thousands of people selling vegetables, spices and fabrics in stores and street stalls.

20 September 2017
As civilians continue to bear the brunt of the conflict in Yemen, two United Nations Special Advisers have voiced their concern over continued allegations of grave human rights abuses and expressed support for the call by the High Commissioner for Human Rights to establish an international investigation.

According to the Office of the High Commissioner (OHCHR), the total number of verified civilian casualties since March 2015 stands at 13,920, including 5,159 people killed and 8,761 injured. The actual numbers are likely to be “far higher,” said the Office, which also noted that coalition airstrikes continue to be the leading cause of civilian casualties, including of children.

In addition, the UN estimates that 17 million people are food insecure, including seven million people on the brink of famine. The unprecedented rise in the cholera epidemic has reached over 690,000 suspected cases with 2,090 associated deaths – the largest ever outbreak in a single year.

“We call on the international community – and particularly the Security Council and Human Rights Council – to take action to end the carnage and remedy this man-made crisis,” Adama Dieng, Special Adviser on the Prevention of Genocide, and Ivan Šimonovic, Special Adviser on the Responsibility to Protect, said in a statement issued on Tuesday.

“The international community has a moral and legal responsibility to support accountability in Yemen by immediately establishing an impartial international mechanism to comprehensively investigate allegations of serious abuses and violations of human rights law and international humanitarian law committed by all parties to the conflict, and their allied forces with a view to ending impunity.

“The perpetrators must be brought to account. Justice must be served to the victims. It is incumbent on the international community to halt the suffering that is being inflicted on the Yemeni population,” the Advisers stated.

OHCHR said yesterday it was “very disturbed” that civilians, including children, continue to be killed in attacks carried out by both the Popular Committees affiliated with the Houthis and army units loyal to the former President, Ali Abdullah Saleh, as well as by the Saudi-led coalition.

Just over the past five days, the Office has confirmed that three children died and seven others were injured in attacks by Houthi/Saleh forces in the Salah district of the city of Taizz; while a coalition airstrike in Marib killed a further five children along with seven adults.

These are just the latest in a series of incidents that demonstrate “the horrific impact on children and families, and all civilians, of the ongoing brutal war,” OHCHR spokesperson Rupert Colville told reporters in Geneva.

“Once again, we urge all sides to exercise restraint and to cease all indiscriminate attacks and take all possible precautions to properly distinguish military objectives from civilian objects and to ensure that their attacks are never directed either at civilians or civilian objects.” 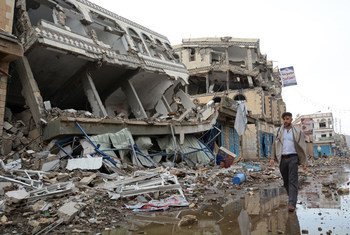 5 September 2017
The United Nations human rights chief has called for an independent, international investigation into the allegations of serious violations of human rights and international humanitarian law in Yemen, in a new report published today.