One year on, UN officials take stock of efforts to address large movements of refugees, migrants

UNHCR/F. Malavolta (file)
Some 275 refugees and migrants waiting to disembark from a tug in the Port of Pozzalo, Italy, after being rescued a few days earlier.

One year on, UN officials take stock of efforts to address large movements of refugees, migrants

20 September 2017
United Nations officials today highlighted the need to continue working together towards more equitable ways to share the responsibility for refugees, as well as achieve safe and orderly migration, at an event to take stock one year after the international community agreed to find solutions to better manage human mobility.

“I believe we can and must find a way through, based on a humane, compassionate, people-centred approach that recognizes every individual’s right to safety, protection and opportunity,” Secretary-General António Guterres said at the General Assembly side event on refugees and migrants.

Recognizing that the issue of large movements of refugees and migrants is too vast for any one country to handle on its own, the UN convened a meeting of world leaders in September 2016 with the aim of finding durable solutions.

At the High-Level Summit on Addressing Large Movements of Refugees and Migrants, all 193 Member States came together around one plan, the New York Declaration, expressing their political will to save lives, protect rights and share responsibility on a global scale.

Mr. Guterres pointed to several priority areas for the year ahead as Member States work to advance the two compacts, including re-establishing the integrity of the refugee protection regime, developing national and international cooperation mechanisms that take human mobility into account, and greater accountability for the human traffickers and smugglers who profit from exploiting the despair of the most vulnerable.

The Special Representative for International Migration, Louise Arbour, underscored that the ability to better manage human mobility rests on both compacts being widely-supported; human rights-centred, and with the needs of those most vulnerable firmly at their heart.

Ms. Arbour, who is responsible for leading the follow-up to the migration-related aspects of the 2016 High-level Summit, urged that the global compact for safe, orderly and migration be grounded in reality.

“The overwhelming majority of migrants move in a well-regulated fashion. Migration is a net positive to migrants and the communities from which they come and in which they settle.”

The crises that drove the adoption of the New York Declaration have not abated, High Commissioner for Refugees Filippo Grandi told the gathering. “And the need for international protection for those fleeing in search of safety is more compelling than ever.”

He noted that the root causes of refugee flows and the triggers of irregular migration are often intertwined, and in mixed migratory movements, refugees and migrants often face overlapping risks.

“More safe and regular pathways for admission and the creation of a more tolerant and accepting environment, would bring important benefits for both groups,” he stated. 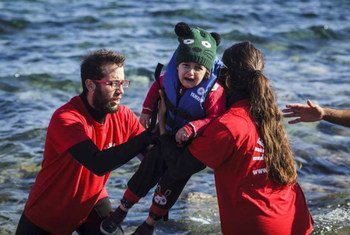