United Nations Secretary-General António Guterres today urged global support for France’s initiative to create the first international legally binding document on the environment, at an event held on the margins of the annual leaders’ summit of the General Assembly.

“It is about our duty of care to provide an environment that supports the health, well-being, dignity, and prosperity of everyone on this planet,” Mr. Guterres said. “Let us support this worthy initiative.”

According to the Permanent Mission of France to the UN, which organized the event, threats to the environment are increasingly impacting the survival of mankind and the planet. It is, therefore, urgent to act and build a sustainable future.

However, experts have highlighted a clear legal challenge: international environment law is fragmented in many conventions and international declarations, the Mission noted.

As such, the Global Pact for the Environment will be the first international legally binding document that gathers and harmonizes all environmental laws in one single document.

The objective of today’s event, which drew many world leaders, was to launch an important consultation to elaborate the instrument.

Mr. Guterres stressed that the realization of aspirations for peace, prosperity and sustainable development hinges on the health of the planet.

He noted that there will soon be more plastic than fish in the seas and biodiversity is disappearing at a rate one thousand times faster than the natural rate. In addition, 90 per cent of the population is breathing polluted air.

“Our only hope to solve these problems is to join forces to protect the environment,” he said, adding that this understanding is already common to both the 2030 Agenda for Sustainable Development, adopted in 2015, and the Paris Agreement on climate change, which entered into force in 2016.

Also addressing the event was General Assembly President Miroslav Lajcák, who said that this proposal deserves consideration and deliberation among Member States and other stakeholders.

Member States need to consider appropriate options for an eventual Global Pact to fit with the more than 500 existing multilateral environmental agreements, he said, while also stressing the need to give due attention to the three pillars of sustainable development, namely the economic, the social and the environmental, in a balanced, indivisible and comprehensive manner.

He also said that the UN system, civil society, the private sector, academia and other relevant stakeholders need to be involved in this ambitious initiative as inclusiveness is key to delivering an outcome that achieves the needed transformation at all levels. 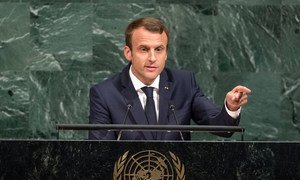 Citing a litany of world crises and quoting directly from victims of man-made and natural disasters, French President Emmanuel Macron today called for a return to the optimism and universal values that inspired the founding of the United Nations 72 years ago, taking into the account the new realities of the 21st century.