UN Photo/Cia Pak
Donald Trump, President of the United States of America, addresses the general debate of the 72nd Session of the General Assembly.
19 September 2017

Noting that the present world is one that offers both immense promise and great peril, the President of the United States told global leaders at the United Nations that it was “entirely up to us” to either lift the world to new heights, or let it fall into a valley of disrepair.

“To overcome the perils of the present and to achieve the promise of the future, we must begin with the wisdom of the past,” Donald Trump said today at the general debate of the 72nd session of General Assembly.

“Our success depends on a coalition of strong and independent nations that embrace their sovereignty to promote security, prosperity, and peace for themselves and for the world.”

Noting that the US would remain a “great friend” to the world, and especially to its allies, the President underscored that his country can no longer be taken advantage of, and that he would defend US interests above all else.

“But in fulfilling our obligations to our own nations, we also realize that it’s in everyone’s interest to seek a future where all nations can be sovereign, prosperous, and secure,” he noted.

Turning to the crisis emanating from the nuclear weapons programme of the Democratic People’s Republic of Korea (DPRK), Mr. Trump underscored if the US is forced to defended itself or its allies, “we will have no choice but to totally destroy North Korea.” Recalling recent resolutions adopted unanimously by the Security Council, he urged that country to pursue the path of denuclearization.

In his remarks, he also criticized the Iranian Government and called on the country’s leadership to halt is support of terrorists, begin serving its people, and respect the sovereign rights of its neighbours. He also noted the need for de-escalation of the conflict in Syria, as well as on sanctions imposed by the US on Cuba and Venezuela.

Also in his remarks, the President spoke of economic progress made by the United States since his election as well as the progress it has made in terms of healthcare, women’s empowerment and military strength.

♦ Receive daily updates directly in your inbox - Subscribe here to a topic.
♦ Download the UN News app for your iOS or Android devices.
General Assembly|usa

UN, US need each other in relationship of 'productive interdependence' - Annan 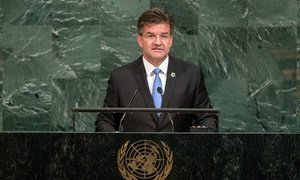