The United Nations refugee agency is urging the Government of the Democratic Republic of the Congo (DRC) to ensure protection for refugees and asylum-seekers following last week’s shooting incident in Kamanyola in which at least 39 people were killed and 94 injured.

“This is a devastating tragedy. It should never have happened,” said UN High Commissioner for Refugees Filippo Grandi.

According to a press release from the Office of the High Commissioner (UNHCR), Mr. Grandi welcomed the announcement from Congolese officials to launch an inquiry into the incident and called for it to be detailed.

The incident took place on 15 September after Congolese soldiers fired live rounds at Burundian protestors in the eastern part of the country, many of whom UNHCR believes were refugees and asylum-seekers. The protest, reported to be initially peaceful, allegedly started after a small group of Burundians were detained by Congolese authorities, creating fears they were going to be deported to Burundi.

The dead included Burundian men, women and one child. The incident also resulted in the death of one Congolese soldier, with six others wounded.

“We need to establish facts and determine responsibility and make sure that such an incident never happens again,” Mr. Grandi said.

UNHCR immediately deployed a team to the area on Saturday where it is working with the medical staff of a partner organization in the local hospital to provide life-saving medical assistance to the injured.

The UNHCR team on the ground reports a tense situation with over 2,400 Burundians seeking protection next to the UN peacekeeping mission’s small base in Kamanyola.

DRC hosts more than 43,700 refugees who have arrived from Burundi since 2015. 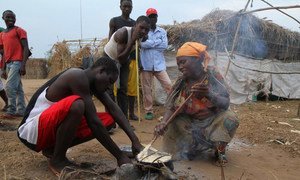 Expressing shock and sadness over the violent death of numerous Burundian nationals – among them likely refugees and asylum seekers – in Kamanyola town, eastern Democratic Republic of the Congo (DRC), the United Nations refugee agency called for an investigation into the incident.