United Nations Secretary-General António Guterres today called on the world to stand in solidarity to condemn sexual exploitation and abuse as he detailed the key initiatives at the heart of his victim-centred approach to address the scourge across the UN system.

United Nations Secretary-General António Guterres today called on the world to stand in solidarity to condemn sexual exploitation and abuse as he detailed the key initiatives at the heart of his victim-centred approach to address the scourge across the UN system.

“Sexual exploitation and abuse has no place in our world,”, Mr. Guterres said in his remarks to the unprecedented High-Level Meeting on the Prevention of Sexual Exploitation and Abuse at UN Headquarters today.

“It is a global menace and it must end,” he added.

The high-level political event demonstrates the international community's solidarity in condemning and committing to combating the scourge – while placing victims' rights and dignity at the forefront of collective efforts.

Underscoring the need for “bold, urgent and much-needed action to root out sexual exploitation and abuse once and for all,” Mr. Guterres said: “We are here in solidarity to specifically focus on the behaviour of individuals who exploit their authority to mistreat those who look to the United Nations for protection.”

The UN chief emphasized that the unspeakable acts of a few should not be allowed to tarnish the work of thousands of men and women who uphold the UN's values “often at great personal risk and sacrifice.”

Stressing that no country or family is immune, the Secretary-General notes that the UN has a responsibility to set a global standard for preventing, responding to and eradicating the scourge – and addressing its impact.

“It pains me to say that this behaviour is perpetrated by both civilians and uniformed personnel, and in settings ranging from humanitarian crises to peace operations to refugee camps – where people are vulnerable and public safety is largely absent,” said Mr. Guterres.

Measures to fight the scourge

The Secretary-General thanked the Member States that had contributed to the Office of the Special Coordinator on improving the UN response to sexual exploitation and abuse and announced the appointment of Jane Connors as the first-ever UN Victims' Right Advocate.

“The Victims' Rights Advocate will develop system-wide mechanisms and policies to promote reliable gender- and child-sensitive processes for victims and witnesses to file complaints,” he explained.

He also recognized Member States that had signed a Voluntary Compact that encompassed specific prevention commitments – urging “all to engage and to join.”

Mr. Guterres also announced the creation of a 'Circle of Leadership' for Heads of State and Government to demonstrate resolve and commitment at the highest political level to eradicate sexual exploitation and abuse.

Noting that humanitarian organizations and civil society provide frontline life-saving assistance and act as “a critical interface” between communities and the UN, he underscored, “we cannot succeed without their partnership.”

“I will establish an Advisory Board of external experts and representatives from civil society,” he added.

Acknowledging that much work is still needed, the UN chief spelled out: “We will not tolerate anyone committing or condoning sexual exploitation and abuse. We will not let anyone cover up these crimes with the UN flag.”

“Every victim deserves justice and our full support. Together, let us make good on that promise,” he concluded.

Woman at forefront of stamping out scourge

With women disproportionately affected, he said they “must be at the core of efforts to find solutions,” as he pushed for better implementation of the Women Peace and Security Agenda; women's full participation in mediation and peacebuilding; and ensuring gender mainstreaming.

“Condemnation alone is not enough, what we need now is action,” he concluded.

In her address, Ms. Connors said sexual exploitation “is rooted in gender inequality and abuse of power.”

“It crushes the dignity of those most at risk,” she said, calling her role as one of advocating for those at risk.

She presented a two-pronged task of identifying ways to prevent abuses and, should they occur, “to protect the human rights and dignity of the victims.”

For his part, Atul Khare, the UN Under Secretary-General for Field Support, said the single-focused meeting was testament to the “depth of harm” caused by UN personnel in every case, which “degrades” the Organization's duty to protect the vulnerable. 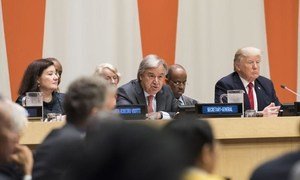 More than 120 countries today declared their support for a series of reforms aimed at overhauling the United Nations bureaucracy to make the world body stronger and more responsive to the people it serves.